Trago Mills (often known simply as Trago) is a chain of four department stores in south Cornwall and south Devon in England, and South Wales. It owns a site with an amusement park and some independent businesses, adjoining the store near Newton Abbot.

Three are in town outskirts: Liskeard in Cornwall; Newton Abbot in Devon, and Merthyr Tydfil in Wales. Another is in Falmouth, Cornwall. The company emphasises cheapness and variety of stock.

The chain was established by businessman Mike Robertson who bought the Liskeard site in the early 1960s after leaving a career in the RAF.

The company's buildings at Liskeard and Newton Abbot were designed by Charles Hunt of St Neot, Liskeard, whom they appointed in 1978. The buildings have a castle-inspired profile, with white towers and black-framed windows.

Trago also experimented with smaller stores, such as a 'Trago Mini Mart' . 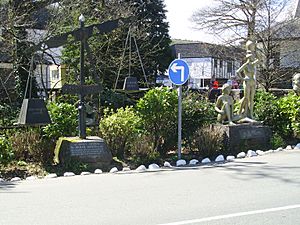 Some of the political statues outside the Liskeard store 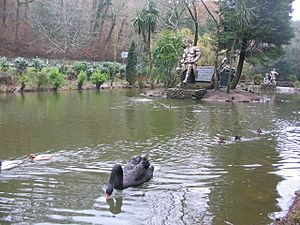 The first Trago Mills store was at Liskeard and started life as a small shed, selling items founder Mike Robertson had bought on trips to larger towns some distance away. The current Liskeard store, five miles west of the town just off the A38 at Two Waters Foot, has several acres of parkland and lakes, with several other local businesses on the site. There are statues at the entrance. One of them is of Attorney General Sir Michael Havers QC. MP, reciting

Why beholdest thou the mote that is in thy brother's eye, but considerest not the beam that is in thine own eye?

—proverb, from Matthew ch7 v1-5 The Mote and the Beam (or the Speck and the Plank)

The Newton Abbot site is the largest of the four and covers over 100 acres (0.4 km2) of land. It has several independent businesses. A garden centre, the largest in the south west, was opened on the site in 2009, followed in 2010 by a new restaurant.

In October 2004, a large fire broke out in the main building of the branch. Thirty fire appliances and over 200 fire fighters tackled the blaze, the largest to occur in Devon for several years. Buildings involved were completely rebuilt.

In summer 2016, Trago2Clear, a clearance outlet for all Trago products closed. On 28 September 2016, demolition took place of the Old Clearance Shed and former Sarah's Pantry Cafe. A new £3 million DIY and Trade centre opened in summer 2017.

The Newton Abbot store has a leisure park attached, called the Trago Family Fun Park. This was opened shortly after the construction of the permanent store buildings and now covers over 100 acres (0.40 km2). Its features are:

The Falmouth store, near the National Maritime Museum Cornwall, is the smallest of the four.

After owning a former factory site in Merthyr Tydfil in South Wales for nearly a decade, work began on the new shopping centre in autumn 2016. The site's multi-million pound store has 17 small towers. The store opened in April 2018. 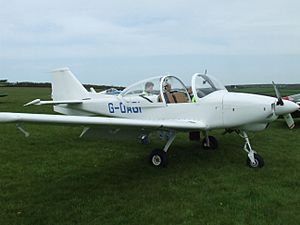 The FLS Sprint seen here at the fly-in at Bodmin Airfield, 3 May 2008.

In the early 1980s, Trago Mills elected to design and build its own aircraft that could be sold to the British military as a trainer to replace the then ageing "Bulldog" fleet. The result was the Trago Mills SAH-1, which first flew on 23 August 1983. Passed over by the armed forces, the rights to the design have since changed hands several times, the latest version being the FLS Sprint.

All content from Kiddle encyclopedia articles (including the article images and facts) can be freely used under Attribution-ShareAlike license, unless stated otherwise. Cite this article:
Trago Mills Facts for Kids. Kiddle Encyclopedia.