Trams in Kraków facts for kids 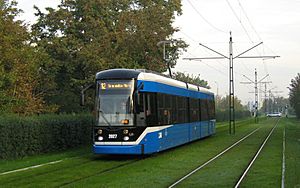 This is a tram in Kraków and its is driving.

The rail system of Kraków has been in operaration since 1882 (115 years ago).

They are like Buses in Kraków, but these are trams and not buses.

All content from Kiddle encyclopedia articles (including the article images and facts) can be freely used under Attribution-ShareAlike license, unless stated otherwise. Cite this article:
Trams in Kraków Facts for Kids. Kiddle Encyclopedia.