Transformers are robots that turn into other things. Usually they turn into vehicles, like cars or jets.

Transformers started in 1984 as a toy line, but then an animated series and a comic book were made. In 1986 a movie came out. In 2002 a new series and story line called Transformers Armada came out. this was followed by two more shows, Energon and Cybertron.

Transformers is about different things sometimes. Usually it is about the heroic Autobots fighting the evil Decepticons. The Autobots are usually led by Optimus Prime. The Decepticons are led by Megatron. 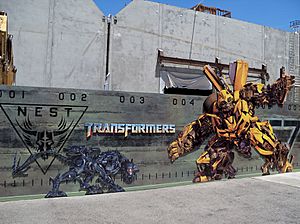 Transformers The Ride construction (Hollywood, May 2010)

All content from Kiddle encyclopedia articles (including the article images and facts) can be freely used under Attribution-ShareAlike license, unless stated otherwise. Cite this article:
Transformers (toy line) Facts for Kids. Kiddle Encyclopedia.