The focus of the museum is on World War II, therefore, all aircraft at the museum are from this time period. The goal of the museum is to preserve and operate these aircraft, as a result, all either are flyable or will be made flyable. The museum publishes a newsletter called "Taking Flight" approximately 1 or 2 times per year. Every June, a fundraising gala is held by the museum. A World War II period barracks exhibit is also on display at the museum.

The museum was formed in 2003 by David O'Maley, Sr. and opened to the public on 21 May 2005. O'Maley is a former CEO of Ohio National Life Insurance Company.

The museum's North American B-25 Mitchell was featured on October 16, 2010 in a flyover of the Virginia Tech football game.

In 2011, due to a large donation, a second hangar was built at the museum to provide additional space for aircraft.

The museum's P-40 was involved in an accident on 8 December 2011, shortly after being restored to flight status. The aircraft experienced an engine failure and had to be glided back to the airport from an altitude of 6,500 feet. Upon landing it overran the runway, went through a fence and came to rest on a nearby road.

The museum's B-25 and P-51 performed flyovers at a Virginia Tech football game on 22 September 2012.

Three World War II veterans received the French Legion of Honour at an event held at the museum on 12 February 2013.

The museum's B-25 performed a flyover for Doolittle Raider Tom Griffin's funeral on 9 March 2013.

The museum's B-25 performed the flyover for the Cincinnati Reds opening day on 1 April 2013.

The museum's B-25 performed the flyover for the opening ceremonies of the Indianapolis 500 with five T-6s from the Cincinnati Warbirds on 26 May 2013.

The museum's B-25 performed part of the flyover for the final toast of the Doolittle Raiders at the National Museum of the United States Air Force on 9 November 2013.

The museum's P-51 performed a flyover at Wright Memorial Hill for the 113th anniversary of the Wright Brothers first flight on 16 December 2016. 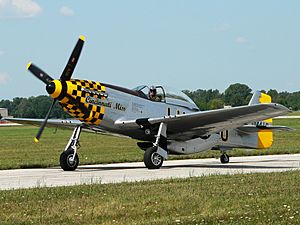 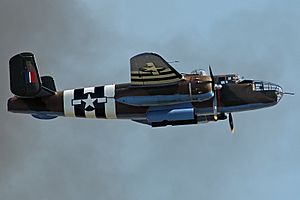 All content from Kiddle encyclopedia articles (including the article images and facts) can be freely used under Attribution-ShareAlike license, unless stated otherwise. Cite this article:
Tri-State Warbird Museum Facts for Kids. Kiddle Encyclopedia.