Trink Hill is a 212-metre-high hill that lies between the hamlets of Trink and Cripplesease, near to the village of Nancledra, Cornwall, UK. Trencrom Hill lies one kilometre to the South East. 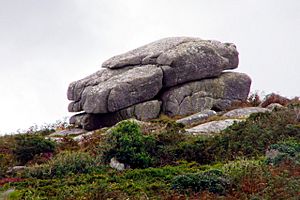 A Round barrow exists at the summit, an OS Trig point within it.

A stone named after the nearby Giew Mine (or Trink Hill menhir) stands on the western slope of the hill.

Twelve O'Clock Rock is a granite outcrop, supposed to be an unusual logan stone in that it can only be rocked at midnight.

Wheal Sister mine, covering both Trencrom and Trink hills was a consolidation of four tin mines in October 1875. The mines were previously known as Wheals Kitty, Margaret, Mary and Trencrom.

There is a covering of bell heather (Erica cinerea) on the hill and in 1926 Miss Gertrude Waterer found a variety with a prostrate habit and lavender flowers. It was commercially introduced by Knap Hill Nursery's in 1933 and awarded a Royal Horticultural Society's Award of Merit in the same year and in 1984 a Garden Merit.

All content from Kiddle encyclopedia articles (including the article images and facts) can be freely used under Attribution-ShareAlike license, unless stated otherwise. Cite this article:
Trink Hill Facts for Kids. Kiddle Encyclopedia.