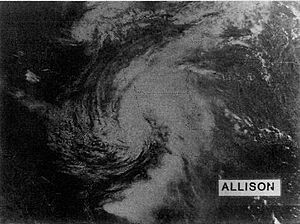 Tropical Storm Allison is a storm that struck Texas and west central Louisiana during June 1989. It was responsible for $500 million in damage and eleven deaths. The storm formed from a westward moving tropical wave merged with the remnants of Pacific Hurricane Cosme. Despite the damage, the name Allison was not retired. However, in June 2001, another Tropical Storm Allison caused major damage in the same areas, causing the name Allison to be retired.

All content from Kiddle encyclopedia articles (including the article images and facts) can be freely used under Attribution-ShareAlike license, unless stated otherwise. Cite this article:
Tropical Storm Allison (1989) Facts for Kids. Kiddle Encyclopedia.