Location of the Tulsa Port of Catoosa 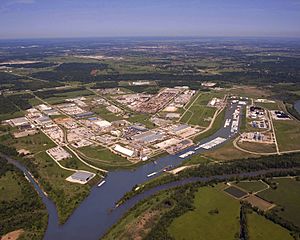 Aerial photo of the Tulsa Port of Catoosa taken May 5, 2008

The Tulsa Ports is near the city of Catoosa in Rogers County, just inside the municipal fenceline of Tulsa, Oklahoma, United States. Located at the head of navigation for the McClellan-Kerr Arkansas River Navigation System (MKARNS), it handles shipping loads through its waterway access to the Arkansas River via the Verdigris River. TPOC offers year round, ice-free barge service with river flow levels controlled by the U.S. Army Corps of Engineers. It encompasses an area of 2,500 acres (10 km2) and employs over 4,000 people at over 70 companies in its industrial park. The port ships manufactured goods and agricultural products from Oklahoma to the rest of the world. Designated a foreign trade zone, it is a major economic engine for the region with over 2.7 million tons of cargo shipped through the Port in 2013 alone.

The notion of making Tulsa a port city on the MKARNS evolved during the early 1960s, as the Corps of Engineers was constructing the massive waterway. A delegation of 23 Tulsa business people travelled to Ohio to evaluate the impact of the effects of the Ohio River Valley navigation systems on regional business growth. They concluded that it would stimulate business in Oklahoma, and convinced other Tulsa business leaders to support the concept. The Metropolitan Tulsa Chamber of Commerce appointed Early Cass to chair a committee, thereafter known as the City of Tulsa–Rogers County Port Authority.

The port received its first commercial shipment in January 1971, It was officially opened for business on February 20, 1970 and was formally dedicated by President Richard M. Nixon on June 5, 1971. This port is the largest in Oklahoma. It is also one of the largest, most inland river-ports in the United States. It is located 8 miles (13 km) from the Tulsa International Airport, and 15 miles (24 km) from downtown Tulsa. It is a fully equipped multi-modal transportation center served by both the BNSF Railroad and the South Kansas and Oklahoma Railroad. The port also provides rail switching services with three dedicated Port-owned switch engines.

In addition to the many private terminals for grain, fertilizer, and break-bulk cargo located along the port channel, the port operates a 200-ton capacity overhead crane as well as a roll-on/roll-off dock.

In 2016 the port added a new 720 foot dock accommodating a rail line and multiple cranes. 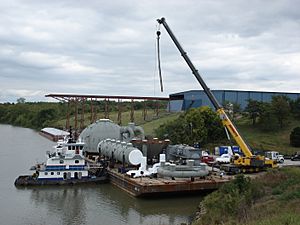 In 2020 the Tulsa Port of Catoosa received a $1.1 million grant from the U.S. Department of Commerce’s Economic Development Administration for railroad crossing repairs, freight rail infrastructure, and interchange improvements at the multimodal shipping complex and industrial park.

On Thursday 24 September 2020, the Tulsa Port of Catoosa rebranded to Tulsa Ports.

The port has five public terminals that can transfer inbound and outbound bulk freight between barges, trucks and railroad cars.

Robert W. Portiss, who has been director of the Tulsa Port of Catoosa since July 1, 1984, retired on December 31, 2016. He was replaced by David Yarborough, who was hired as operations manager in 2006, and promoted to deputy director in 2008.

All content from Kiddle encyclopedia articles (including the article images and facts) can be freely used under Attribution-ShareAlike license, unless stated otherwise. Cite this article:
Tulsa Ports Facts for Kids. Kiddle Encyclopedia.