The Cherokee Nation controlled the region during the 19th century. After the Atlantic and Pacific Railroad laid tracks in the early 1880s, the community became a cow town, with the establishment of William Halsell's Bird Creek Ranch. In 1883, the Federal Government opened a post office here.

The name of the city is derived from the Cherokee language, phonetically pronounced "Ga-du-si" or "Ga-tu-si". Various interpretations of this word exist, including: "between two hills", "on the hill", "into the hills", and possibly signifying a prominent hill or place thereon.

Catoosa was home to Bluford "Blue" Duck, the infamous outlaw depicted in Lonesome Dove. He is buried in Dick Duck Cemetery located at the intersection of 193rd and Pine street.

In 1971, the Tulsa Port of Catoosa opened and gave the town an economic boom. The port's 2,000-acre (8.1 km2) industrial park provided jobs for over 2,600 workers by the 21st century. As of December 2013[update], it had 70 businesses with over 4,000 workers. The port connects to the Mississippi River and the Gulf of Mexico via the McClellan-Kerr Arkansas River Navigation System.

On the evening of April 24, 1993, the town was struck by an F4 tornado on the Fujita scale. Seven people were left dead in the tornado's wake, with six of the fatalities at a truck stop and one in a trailer park. In the aftermath of the tornado, which caused an estimated $500,000 in damage, 100 National Guard troops were deployed by Governor David Walters.

Catoosa is located 14 miles (23 km) northeast of Tulsa, Oklahoma in Rogers County, Oklahoma. This location provides mid-America river shipping access at the Tulsa Port of Catoosa. According to the United States Census Bureau, the city has a total area of 7 square miles (18 km2), of which 7 sq mi (18 km2) is land and 0.14 percent is water.

Catoosa has an inland seaport and the terminus of the Kerr-McClellan Arkansas River Navigation System. The Port of Catoosa is one of the farthest inland seaports in the United States, linking Tulsa to the Arkansas River, the Mississippi River, and eventually to the Gulf of Mexico.

Catoosa is linked by the South Kansas and Oklahoma Railroad through Owasso to Tulsa and points north.

Catoosa is located along historic Route 66.

As of 2011, Catoosa High School had 609 students enrolled and 13 students for every teacher.

In 2010, Catoosa changed its form of government from a strong mayor to a council-manager type.

Catoosa had one newspaper, the Catoosa Times, which stopped publishing at the end of 2013. The paper was published every Wednesday. It was owned by Community Publishers, a newspaper and Internet publisher and commercial printer that serves Oklahoma, Missouri, and Arkansas. 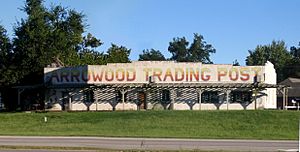 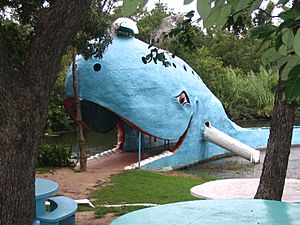 Mural at the D.W. Correll Museum

All content from Kiddle encyclopedia articles (including the article images and facts) can be freely used under Attribution-ShareAlike license, unless stated otherwise. Cite this article:
Catoosa, Oklahoma Facts for Kids. Kiddle Encyclopedia.