The Blue Whale of Catoosa

The Blue Whale of Catoosa is a waterfront structure, just east of the American town of Catoosa, Oklahoma, and it has become one of the most recognizable attractions on old Route 66. It is home to the third location of the Spectacles launched by Snapchat in 2016.

Hugh Davis built the Blue Whale in the early 1970s as a surprise anniversary gift to his wife Zelta, who collected whale figurines. The Blue Whale and its pond became a favored swimming hole for both locals and travelers along Route 66 alike.

Originally, the pond surrounding the massive Blue Whale was spring fed and intended only for family use. However, as many locals began to come to enjoy its waters, Davis brought in tons of sand, built picnic tables, hired life guards, and opened it to the public. 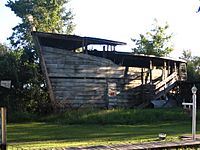 Former Animal Reptile Kingdom attraction next to the Blue Whale

Originally calling it Nature's Acres, Mr. Davis continued to add to the roadside attraction until it eventually included The Fun and Swim Blue Whale and the A.R.K. (Animal Reptile Kingdom). The attraction also featured Hugh's brother-in-law, Indian Chief Wolf-Robe Hunt, a full blooded Acoma Indian, who was famous in his own right for his Indian paintings and as a highly skilled silversmith. Chief Wolf-Robe Hunt once ran the Arrowood Trading post across the highway from the Blue Whale attraction.

By 1988, the Davises were not able to continue managing the attraction, so they closed it to the public. Davis died in January 1990, followed by his wife Zelta in 2001. The park soon fell into disrepair, crumbling from neglect and weather. However, after a decade the people of Catoosa and employees of the Hampton Inn launched a fund-raising and volunteer effort to restore the Route 66 landmark. The Blue Whale was restored and repainted to its original brilliant blue. The adjacent picnic area has also been restored.

All content from Kiddle encyclopedia articles (including the article images and facts) can be freely used under Attribution-ShareAlike license, unless stated otherwise. Cite this article:
Blue Whale of Catoosa Facts for Kids. Kiddle Encyclopedia.