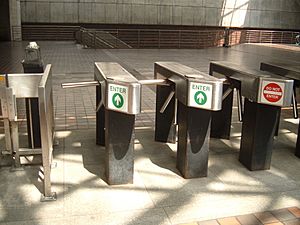 Turnstiles at a subway station

A turnstile, also called a baffle gate, is a type of gate. It only allows one person to pass at a time. It can also be made so as to make one-way traffic of people. It can also make passage only to people who put in a coin, a ticket, a pass, or similar. A turnstile can be used for paid access (sometimes called a faregate when used for this). For example, it can be used in public transport as a ticket barrier or at a pay toilet.

Turnstiles are used at a variety of places. This includes stadiums, amusement parks, museums, and mass transit stations.

All content from Kiddle encyclopedia articles (including the article images and facts) can be freely used under Attribution-ShareAlike license, unless stated otherwise. Cite this article:
Turnstile Facts for Kids. Kiddle Encyclopedia.