VIA 57 West facts for kids 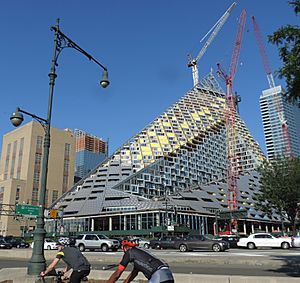 Under construction in July 2015 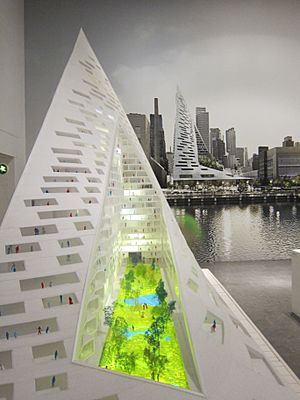 Bjarke Ingels met the New York developer Douglas Durst in the early 2000s when he was in Denmark. Durst, who visited Ingels' Copenhagen studio in February 2010, found him very inventive, noting that unlike other architects, "What was striking about his work was that each design was so different, and designed for the locale."

In spring 2009, Durst Fetner Residential commissioned BIG to bring a new residential typology to Manhattan. In 2011, BIG opened an office in New York to supervise W57's development and construction. According to The New York Times, the name was chosen "because the southbound West Side Highway slopes down as drivers enter the city, right at the spot where the building is situated", serving as an entrance to Manhattan "via 57th".

VIA 57 West is Ingels's first New York project. From Manhattan, the 709-unit building resembles a distorted pyramid with a steeply sloped facade, rising 467 feet (142 m) toward the northeast. Across the river in Weehawken, New Jersey, the building's sloped facade gives the appearance of an extra large sailing vessel making its way across the Hudson River.

With its angular balconies around an integrated green plaza, the block will connect with the waterfront and the Hudson River Park, taking full account of the surroundings while providing fine views with little traffic noise. The building has a floor area of 861,000 square feet (80,000 m2) including residential and retail programming. The northern facade of the building features a number of balconies skewed at a 45-degree angle, a pattern employed in Ingels's previous works, such as the VM Houses in the Ørestad section of Copenhagen.

Landmark Theatres runs an eight screen theatre on the ground floor of the building.

All content from Kiddle encyclopedia articles (including the article images and facts) can be freely used under Attribution-ShareAlike license, unless stated otherwise. Cite this article:
VIA 57 West Facts for Kids. Kiddle Encyclopedia.