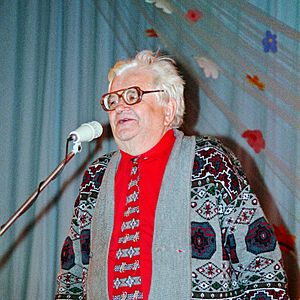 Valentin Berestov born April 1, 1928 of Meshchovsk, Kaluga Oblast. Read the future poet learned in four years. In 1942, during World War II, Berestovs family was evacuated to Tashkent. There, he was lucky to get acquainted with Nadezhda Mandelstam, who introduced him to Anna Akhmatova. Then there was a meeting with Korney Chukovsky, who played a big role in the fate of Valentin Berestov.

His first works were published in the Smena Magazine in 1946. The first collection of poetry 'Departure' and the first children's book for the About the car came out in 1957. Then the readers acquainted with the collection of poems and tales Happy Summer, Pictures in puddles, Smile and others.

Member of the Union of Soviet Writers. He signed the letter in defense of Yuli Daniel and Andrei Sinyavsky (1966).

In his later years, he wrote and produced children's stories with his wife, artist, and writer Tatyana Alexandrova.

All content from Kiddle encyclopedia articles (including the article images and facts) can be freely used under Attribution-ShareAlike license, unless stated otherwise. Cite this article:
Valentin Berestov Facts for Kids. Kiddle Encyclopedia.