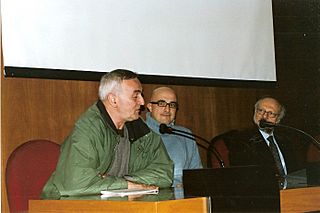 Valentino Zeichen (24 March 1938 – 5 July 2016), was an Italian poet and writer. He was born in Fiume, Italy. Zeichen's poetry has been praised for its ability to quickly hook the reader. His works include humor. A literary award named after him, the Premio Zeichen, is held every December in Rome. Zeichen himself was the only member of the jury.

All content from Kiddle encyclopedia articles (including the article images and facts) can be freely used under Attribution-ShareAlike license, unless stated otherwise. Cite this article:
Valentino Zeichen Facts for Kids. Kiddle Encyclopedia.