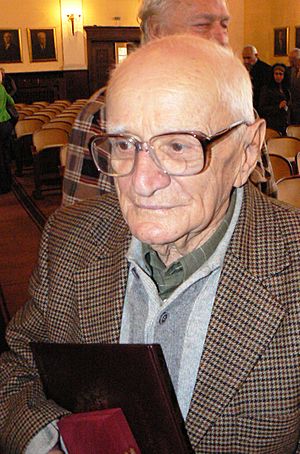 Valeri Nisim Mevorah (Bulgarian: Валери Нисим Меворах; 22 April 1920 – 27 August 2014), better known as Valeri Petrov (Bulgarian: Валери Петров), was a Bulgarian poet, screenwriter, playwright and translator. He was active between 1945 and the 1990s. He wrote the screenplay for a movie called Yo Ho Ho in 1981. It was made into a movie again in 2006, called The Fall .

Petrov was born in Sofia. His father was Jewish. During World War II, Bulgaria was (for a time) pro-Nazi so he used his non-Jewish mother's surname. He graduated in medicine from Sofia University in 1944. He was politically a leftist and socialist. Between 1947 and 1950, to continue his writing career he worked as a press and cultural attache and traveled to Rome, Italy. He also went to the United States, Switzerland and France.

He was a member of the Bulgarian parliament.

All content from Kiddle encyclopedia articles (including the article images and facts) can be freely used under Attribution-ShareAlike license, unless stated otherwise. Cite this article:
Valeri Petrov Facts for Kids. Kiddle Encyclopedia.