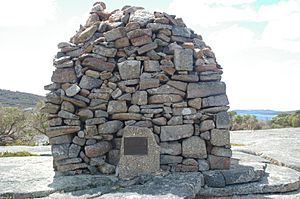 The cairn commemorates the landing of George Vancouver in 1791. Vancouver was sailing to America when he entered and named King George Sound. He stayed a short while before departing to the east.

At the top of a high rocky point, the monument is of freestone and 1.8 metres (6 ft) in height. It was constructed between 1791 and 1972, was classified by the National Trust in 1977 and was placed on the Register of the National Estate in 1980.

All content from Kiddle encyclopedia articles (including the article images and facts) can be freely used under Attribution-ShareAlike license, unless stated otherwise. Cite this article:
Vancouver's Cairn Facts for Kids. Kiddle Encyclopedia.