Situated along a hill occupying the southern edge of the Salmon River valley near the town's southeastern boundary, the park is dominated by Lepper Brook, which joins the Salmon River downstream from the park near the town's business district. Within the park, the northward flowing Lepper Brook follows a dramatic gorge which is carved out of the hill and features two waterfalls (Joseph Howe Falls and Waddell Falls).

Except for a small developed area at its northern edge, the park is heavily forested with old-growth trees and features unique geological features including a fault line. 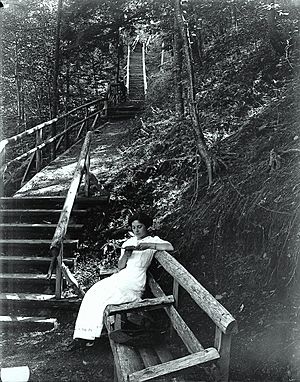 The park was established in 1887 when Susan Waddell Stevens donated 25 acres (100,000 m2) of land for the creation of a public park. The town of Truro formed a Board of Trustees and named Sir Adams G. Archibald as chairperson; the park was named Victoria Park in honour of Queen Victoria, the monarch at that time. In 1888, the park was enlarged by six additional donations of adjacent land parcels. Subsequent donations over the next century would enlarge the park to its present 1,000 acres (4.0 km2).

In 1901, the Board of Trustees was renamed and incorporated as the Victoria Park Board of Trustees. The town introduced a set of by-laws for the park in 1913 which included controls against private business use, impact to wildlife, firearms, alcohol, profanity and speed limits of vehicles.

In 1943, the park provided the namesake for the ship SS Victoria Park, a wartime freighter built at the Pictou Shipyard which served in the Battle of the Atlantic in World War II.

Until the early 1980s, it was possible for park visitors to reach deeper areas of the park on paved roads with motor vehicles.

The park suffered some damage from "Hurricane Juan" in 2003. Several trees were damaged, leading to various methods being considered to repair the damage, without causing more damage to the old-growth forest in the process.

In 2010, WorldCan Inc., a New Brunswick-based company which was a franchise operator for Quebec-based TreeGo, contacted the town to propose locating an aerial adventure business within Victoria Park in the Lepper Brook gorge. Truro Town Council rejected the proposal for the original site but followed up with a proposed location at the upper end of Wood Street near the town reservoir. The TreeGo proposal generated considerable controversy with a grassroots campaign by opponents including protest marches, social media, petitions and letter writing; most opponents cited the importance of preserving Victoria Park under the original vision of the Victoria Park Board of Trustees, which was the reason for how the old-growth forest developed in the park in the first place. Supporters of the TreeGo proposal cited economic development potential of such a tourist attraction for the town.

All content from Kiddle encyclopedia articles (including the article images and facts) can be freely used under Attribution-ShareAlike license, unless stated otherwise. Cite this article:
Victoria Park, Truro, Nova Scotia Facts for Kids. Kiddle Encyclopedia.