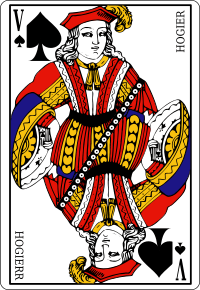 Vieux garçon or le Pouilleux ("Scruffy"), also sometimes called mistigri, le pissous, le puant ("stinker"), Pierre noir ("black Peter") or le valet noir ("black jack"), is a game which requires 51 cards, i.e. the standard 52-card pack minus the jack of clubs. It is a game for two to eight players. It is of the same family as old maid and Black Peter.

The aim is to shed your cards in order to avoid being the last in. The last to hold the pouilleux ("scruffy one"), that is to say the jack of spades has lost.

The dealer deals all the cards, clockwise in threes, the last player to be dealt receives the last two cards. Cards may also be dealt individually, but still clockwise.

Each player discards his pairs (Hearts and Diamonds or Clubs and Spades) of the same value.

The player with one card less than the others begins the game by drawing a card from his left-hand neighbour, without showing it to the other players. If this allows him to form a new pair, he immediately discards them. It is then the neighbour's turn to draw, always from the person to his left. The game continues in this way until all the pairs have been formed and there is only one card left, the pouilleux, because it is unable to form a pair with its counterpart, the jack of spades.

Vieux garcon or pouilleux is a game of chance, there is no particular technique to increase your chances of winning. On the other hand, players with the pouilleux often have fun bluffing by highlighting a card from their deck to mislead whoever has to draw:

Another bluff is to hold the cards more or less firmly, the picker abandoning a card that is held too loosely (because it is probably the pouilleux that he wants to get rid of). Holding the pouilleux firmly is therefore misleading.

There are games, more suitable for children, in which the pouilleux is represented by a grey cat named Mistigri, and the other cards are paired, often in a humorous way. This should not be confused with Mistigri, which is a different game.

For more suspense, you can randomly choose a card as pouilleux by removing it from the pack face down.

All content from Kiddle encyclopedia articles (including the article images and facts) can be freely used under Attribution-ShareAlike license, unless stated otherwise. Cite this article:
Vieux garçon Facts for Kids. Kiddle Encyclopedia.