Black Peter is the English name of the European game of Schwarzer Peter which originated in Germany where, along with Quartett, it is one of the most common children's card games.

The name Black Peter may be derived from the robber, Johann Peter Petri, a contemporary and accomplice of Johannes Bückler, the notorious highwayman known as Schinderhannes. Petri also went under the nickname of "Old Black Peter" (der alte Schwarzpeter) or just "Black Peter" (Schwarzer Peter) and is supposed to have invented the game while in prison after 1811. However, the origin of the game is probably much older (see below).

The origin of Black Peter is unclear. Its rules are recorded as early as 1821 in Das Neue Königliche L'Hombre, which is considerably before those of the similar English game of Old Maid (earliest known rules 1884 and described in Bazaar, Exchange and Mart in 1883 as a "newly invented game"), and the French game of Vieux Garçon ("Old Boy"), first recorded in 1853 by Lasserre. They are probably much older and once simple gambling games in which the aim was to determine a loser who had to pay for the next round of drinks (cf. drinking game). These games employ a pack of 32 French cards, the Queen of Hearts being removed in the case of Old Maid, or one of the Jacks in the case of Vieux Garçon. The player who is last in and left holding a single Queen or Jack is the "old maid", "vieux garçon" or "jackass" and would originally have had to pay for the next round.

Black Peter has long been a popular children's game and numerous proprietary packs are produced today aimed at the children's market. In older packs, the Black Peter was typically a stylised image of a negro; more modern packs use a variety of images such as chimney sweeps, black crows or black cats. 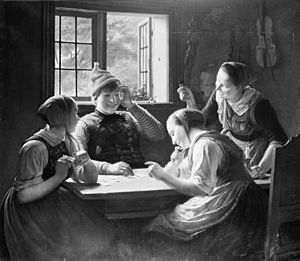 Special Black Peter packs usually consist of 31 or 37 cards: the 'Black Peter' and 15 or 18 pairs of cards. Instead of proprietary playing cards, a pack of traditional French cards may be used with a Joker as the Black Peter, or one card removed to make a particular pair incomplete.

Any number of players can participate in the game, but at least two. The cards are shuffled and fully dealt out to the players. If a player finds a pair in their hand, they must discard those cards immediately.

Now the card drawing begins: the youngest child, or the child holding the most cards, or the player to the left of the dealer, draws a card from the player to his left and adds it to his hand. If that player can form a pair with this new card, he must discard that pair. Then it is the turn of the player on the left to play in the same way. In this way, the game continues until all pairs are discarded and one player is left with Black Peter as the only card. This player is Black Peter and receives the agreed penalty, such as a black dot on his forehead, nose or cheek.

Names in other countries

Italian children play Asinello ("little donkey"). In Sweden the game is called Svarte Petter, in Finland Musta Pekka, in Denmark Sorteper and in the Netherlands Zwarte Piet. However, there it is the same name as Saint Nicholas', helper, a character similar to Knecht Ruprecht or Krampus in German-speaking regions.

It is known in Dutch as zwartepieten ("playing Black Pete") or pijkezotjagen ("Chasing the jack of spades"), in Polish as Piotruś ("Peter"), in Icelandic as Svarti Pétur ("black Peter"), in Czech as Černý Petr ("black Peter") and in Greek as "mu(n)tzuris" (μου(ν)τζούρης, "smudged, smutted").

The German saying "jemandem den Schwarzen Peter zuschieben" ("to pass the Black Peter to someone") means to pass the buck, to blame or to dump something inconvenient such as an unwelcome problem or responsibility on another person.

All content from Kiddle encyclopedia articles (including the article images and facts) can be freely used under Attribution-ShareAlike license, unless stated otherwise. Cite this article:
Black Peter (card game) Facts for Kids. Kiddle Encyclopedia.