Volodymyr the Great facts for kids 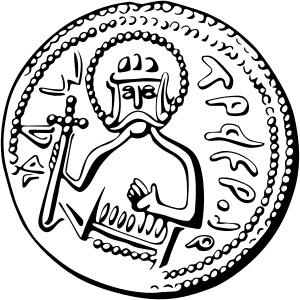 Coin of Volodymyr with his image

Volodymyr was the son of Prince Sviatoslav I of Kyiv of the Rurik dynasty. After the death of his father in 972, Volodymyr moved to Scandinavia from Novgorod as his brother Yaropolk had murdered his other brothers in order to gain the power in Kyiv. In Sweden and Norway he gathered a Varangian army and took Novgorod from his brother Yaropolk. By 980, Volodymyr had consolidated the Kyiv kingdom from modern-day Ukraine, Belarus and minor parts of modern day Russia.

In 981 he captured the Cherven towns from the Poles. In 981–984 he suppressed and conquered a few Slavic tribes including Vyatychi and Radymychi. In 985 Vololdymyr made a war against the Volga Bulgars.

All content from Kiddle encyclopedia articles (including the article images and facts) can be freely used under Attribution-ShareAlike license, unless stated otherwise. Cite this article:
Volodymyr the Great Facts for Kids. Kiddle Encyclopedia.