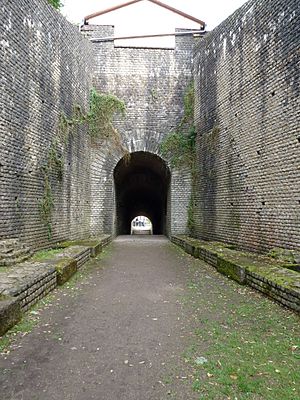 A vomitorium in a Roman amphitheater.

A vomitorium is a hallway or alcove found in ancient Roman buildings. It is called a vomitorium because it can allow many, many people to enter or leave the building at the same time. The word in Latin means "place from which things spew forth," or "place that things come out of quickly."

Because the name sounds like "vomit" in English, people in the 1800s and 1900s thought a vomitorium was a special room that ancient Romans would go to during feasts. They would throw up in that room to empty their stomachs so they could return to the feast and eat more. But this is not true. Ancient Romans did not build special rooms to vomit in.

All content from Kiddle encyclopedia articles (including the article images and facts) can be freely used under Attribution-ShareAlike license, unless stated otherwise. Cite this article:
Vomitorium Facts for Kids. Kiddle Encyclopedia.