Waimānalo Beach is a census-designated place (CDP) located in the City & County of Honolulu, in the District of Koʻolaupoko, on the island of Oʻahu in the U.S. state of Hawaiʻi. This small windward community is located near the eastern end of the island, and the climate is dry. As of the 2010 Census, the CDP had a population of 4,481. This neighborhood is close to, but somewhat separate from Waimānalo, although the two form a single community.

Waimānalo Beach (the town) lies along the eastern half of Waimānalo Beach (the beach), with an overall length of nearly 5.5 mi (8.9 km), the longest stretch of sandy shoreline on Oʻahu. Waimānalo Beach has sparse commercial development along Kalanianaole Highway, and is noteworthy for its local flavor and proximity to Makapuʻu Beach and Sea Life Park, which lie closer to Makapuʻu Point at the east end of the island of Oʻahu. There are no hotels here.

The U.S. postal code for Waimānalo Beach and Waimānalo is 96795.

Kazuo Sakamaki, the first prisoner of war taken by U.S. forces during World War II, was captured on December 8, 1941, on Waimānalo Beach the day after the surprise attack on Pearl Harbor and surrounding targets in Honolulu by Imperial Japanese Navy forces.

The Anderson Estate, which was featured in the TV series Magnum, P.I. as "Robin's Nest", is located in Waimānalo Beach. 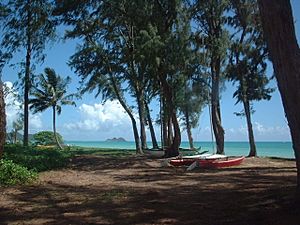 Peaceful and typical scene behind the residential areas of Waimānalo 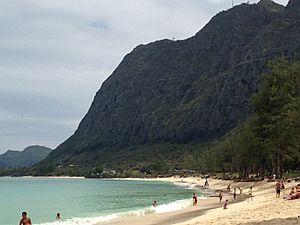 Waimānalo Beach itself, including 'da Bend' (looking south towards Makapu'u)

There were 1,006 households, out of which 28.7% had children under the age of 18 living with them, 51.4% were married couples living together, 23.2% had a female householder with no husband present, and 15.7% were non-families. 8.9% of all households were made up of individuals, and 2.7% had someone living alone who was 65 years of age or older. The average household size was 4.25 and the average family size was 4.50.

All content from Kiddle encyclopedia articles (including the article images and facts) can be freely used under Attribution-ShareAlike license, unless stated otherwise. Cite this article:
Waimanalo Beach, Hawaii Facts for Kids. Kiddle Encyclopedia.