Wayne Rhoden is a music producer, singer and songwriter who is professionally known as the artist Father Goose Music, and is a Grammy-winner with “Dan Zanes and Friends” and is also known as Rankin Don and Don Chibaka.

He made a name for himself in the underground circuit in Jamaica and on the streets of Brooklyn, New York under the personas of Rankin Don and Don Chibaka. As Father Goose he performs children's music, Kindie rock, and reggae-fied nursery rhymes, often in the “Dan Zanes and Friends” ensemble, including in a series of Disney videos entitled “House Party Time.”

Wayne Rhoden was born in Jamaica to Joyce and James Rhoden and grew up in Brooklyn, New York. Like many musical artists, his debut performance occurred at a young age. He recalls that his first singing performance happened at the age of five, using his family and friends as his audience. On subsequent occasions he would serve as DJ for parties thrown by his parents. Later he performed in a PTA-hosted Ash Wednesday fundraising fair at his Ewarton grade school.

He attended Erasmus High School in Brooklyn, New York, then went on to pursue a career in electrical engineering. But as fate would have it, he was drawn to his first love, music.

In the 1980s as Rankin Don he recorded the hits Can’t Find Me Love and Baddest DJ and in the 90s the Real McCoy, Black Queen, and Green Card. He was later introduced to producers who urged him to record for the mainstream labels. He has performed at concerts with some of reggae's well-known artists including, Gregory Isaacs, Andre, Sleepy Worder, Lloyd D Stiff, and Blacka Ranks; Grammy nominees Beres Hammond and Freddie McGregor; and past Grammy winners Shabba Ranks, Shaggy, and Beenie Man.

His relationship with musician Dan Zanes was initiated by his mother, who while working for Zanes, suggested that he should meet her son and check out his talent.

In the 2000s as Father Goose he was featured on several Dan Zanes albums such as Rocket Ship Beach and Catch That Train! and also released three of his own albums: Color with Father Goose, It’s a Bam Bam Diddly, and Bashment Time.

In 2008 as Don Chibaka he gave his performance on the Etcetera single Dance Like That (Remix) featuring Richie Stephens and Kevin Lyttle. 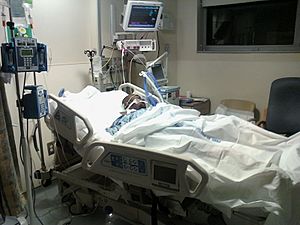 Rhoden is the father of two. He lives in Brooklyn with his wife and his son (Little Goose) who also sings and performs in his father's band.

In 2007, Rhoden discovered he had kidney failure. He received a kidney in December 2015 after eight years on dialysis, twice on life support and other complications. The kidney transplant was successful: he has made a full recovery and is currently still performing and hosting music workshops for children.

All content from Kiddle encyclopedia articles (including the article images and facts) can be freely used under Attribution-ShareAlike license, unless stated otherwise. Cite this article:
Wayne Rhoden Facts for Kids. Kiddle Encyclopedia.