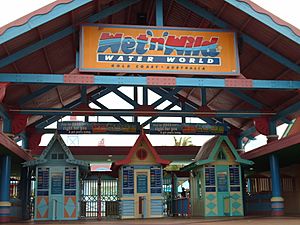 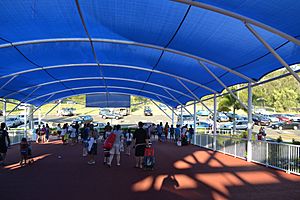 The large entrance walkway/queue with cover

Wet'n'Wild Gold Coast is a water park situated in Oxenford, Gold Coast, Queensland, Australia, owned and operated by Village Roadshow Theme Parks. In 2009, the park received 1,095,000 visitors ranking it first in Australia and eighth in the world. Wet'n'Wild Gold Coast is located adjacent to Warner Bros. Movie World, a movie-related park also owned by Village Roadshow Theme Parks. The park remains open all year with all of the pools and slides heated during the winter months. It is one of seven water parks operating under the Wet'n'Wild brand globally.

The original park, called Cade's County was the brainchild of Colin Herringe. The concept of Cade's County WaterPark was conceived after years of researching hundreds of other waterparks around the world. Many of the original pools and slides were improvements on similar popular rides found in parks such as Wet'n'Wild Orlando, White Waters Garland TX, and NaraWorld Japan. Construction began in 1982 and at time of construction was the largest WaterPark in the Southern Hemisphere. The original name Cade's County Waterpark was named after Herringe's son Cade.

Under ownership of Village Roadshow Theme Parks, the park changed its name to Wet'n'Wild Water World to match the related Sea World and Warner Bros. Movie World theme parks. In 2013, to distinguish the park from Wet'n'Wild Sydney, the park's name was changed to Wet'n'Wild Gold Coast.

Scenes set at a water park (fictionally called "Splash Planet") in The Inbetweeners 2, a 2014 British comedy film, were filmed at the park. 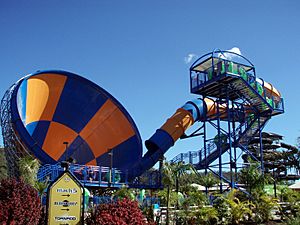 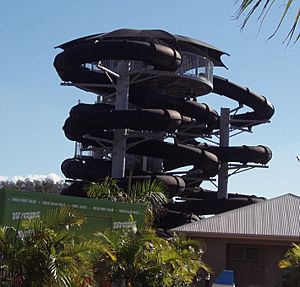 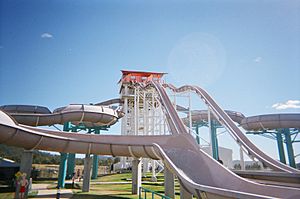 In selected peak seasons (such as the 2012–2013 summer season) Wet'n'Wild Gold Coast offers Fast Track, a system where guests could get to the front of a ride's line in exchange for a set fee. A similar system is in operation at Warner Bros. Movie World.

The Extreme H2O Zone first opened at the back of the park for during 2006 with three rides with staggered openings. It features the latest cutting-edge attractions including a funnel slide, enclosed and open tube slides and a large body slide complex. 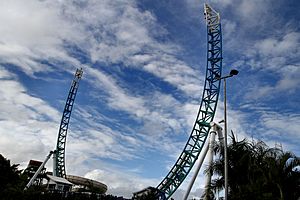 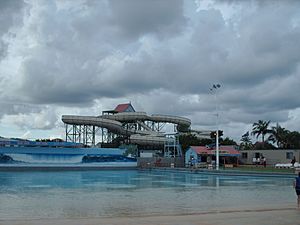 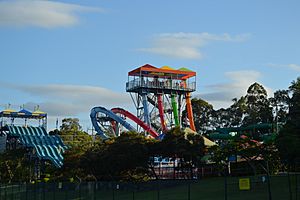 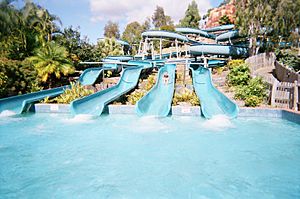 Aerial panorama of Wet and Wild and its immediate surrounds on a cloudy autumn day. 2018.

There are several food outlets placed throughout the park, each one specialising in different styles of fast food:

There are two merchandise stores placed towards the front of the park.

All content from Kiddle encyclopedia articles (including the article images and facts) can be freely used under Attribution-ShareAlike license, unless stated otherwise. Cite this article:
Wet'n'Wild Gold Coast Facts for Kids. Kiddle Encyclopedia.