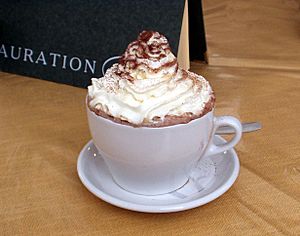 Whipped cream is a dairy food used in many desserts. It is made with heavy cream, a type of cream that contains a large amount of fat.

To make whipped cream, a person whips or beats the heavy cream with a whisk or an electric mixer until it becomes fluffy and filled with air. For some desserts, people add icing sugar as a sweetener. Some people also add flavourings to whipped cream, such as vanilla.

All content from Kiddle encyclopedia articles (including the article images and facts) can be freely used under Attribution-ShareAlike license, unless stated otherwise. Cite this article:
Whipped cream Facts for Kids. Kiddle Encyclopedia.