The William Treadwell House, also known as the Bruce Coleman House, is a private house located at 446 North Meridian Road in Hudson, Michigan. It was designated a Michigan State Historic Site and listed on the National Register of Historic Places in 1974. 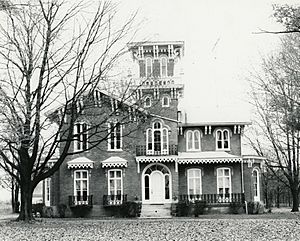 William Treadwell grew up in Hudson, and began his career as a dry goods clerk. He later began working in the People's State Bank in Hudson to learn the business, and in 1859, William and his father Urias purchased the bank, with William providing the management and his father the capital. In 1862 William Treadwell married Mary Hester, and around the same time he began building this house. However, in early 1864, William Treadwell concocted a scheme to embezzle money from the bank, and on January 20, left town with $66,000 in his suitcase. Three weeks later he was caught in Ohio with his wife and in-laws and returned to Michigan, where he was tried and convicted. On the afternoon of his sentencing, Treadwell escaped jail with an accomplice. The accomplice later murdered Treadwell for the money in his pocket; Treadwell's body was found in the woods two weeks later. Treadwell never occupied the house he had built.

The William Treadwell House is currently a private residence.

The William Treadwell House is a two-story brick Italian Villa structure on a cut stone foundation. Two bays balance the main mass of the house, and it is surmounted by a gable roof. External architectural embellishments include elaborate brackets, wrought iron railings, rounded arch windows and doorways, and a two-tiered, square tower. Although the interior has been extensively altered, the exterior remains original.

All content from Kiddle encyclopedia articles (including the article images and facts) can be freely used under Attribution-ShareAlike license, unless stated otherwise. Cite this article:
William Treadwell House Facts for Kids. Kiddle Encyclopedia.