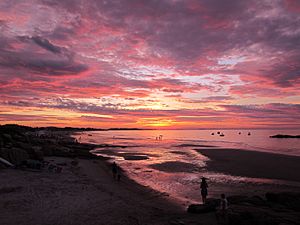 According to the USGS the name is a corruption of the earlier Dutch name "Wyngaerts Hoeck", which was derived from "Wyngaerton" (meaning "Vineland"). The name was described by Professor Trumbull as "not Indian" but stated by Professor E. N. Horsford to be "an undoubted corruption of the German (Low Dutch) name, "Wyngaerts Hoeck", which occurs on many maps between 1630 and 1670, especially in Ogilby's "America"." The beach was alternatively called Coffins Beach for Peter Coffin whose farm was located alongside this beach."

All content from Kiddle encyclopedia articles (including the article images and facts) can be freely used under Attribution-ShareAlike license, unless stated otherwise. Cite this article:
Wingaersheek Beach Facts for Kids. Kiddle Encyclopedia.