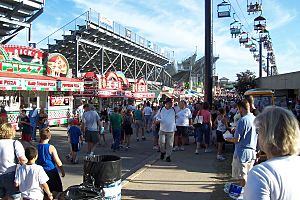 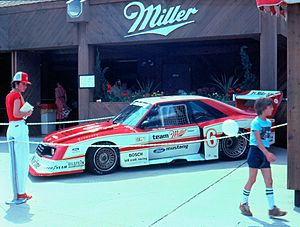 The first Wisconsin State Fair was held in 1851 in Janesville, with approximately 13,000 to 18,000 people in attendance. Sponsored by the state’s Agricultural Society, it was held on a six-acre plot along the banks of the Rock River. It featured a 200-pound squash and a quarter-acre plowing competition with teams of horses and oxen. It was reportedly the largest gathering in Wisconsin history.

When the second fair was held in Milwaukee in 1852, fairgoers took their carriages for rides around the Cold Spring Race Course.

Abraham Lincoln was invited to give the annual oration at the fair in 1859. He spoke on the principles of free labor - farmers and their families working for themselves without the use of hired labor - and of the interconnectedness of farmers, merchants, and other businesses. He advised farmers to embrace new methods of agriculture, with the goal of raising the standard of living.

The fair added new attractions each year, and in 1869, there was a fire engine demonstration where boxes, barrels and a large wooden building were set aflame. For decades, the fair moved from city to city, including Janesville, Watertown, Fond du Lac, Madison and Milwaukee, until 1892, when it was first held at its permanent and present location at Wisconsin State Fair Park.

During the 2011 fair, a small but violent flash mob was formed and began attacking fairgoers, with some witnesses stating that the attacks were racially-motivated. Eighteen people, including seven police officers, were injured during the event. In response, fair managers added a youth curfew and worked with civic and youth leaders to prevent a recurrence.

The Milwaukee Mile is a one-mile paved oval racing circuit on the grounds of the State Fair. It is the oldest continuously-operated motor racing circuit in the world. Racing or exhibition events are often held on the circuit in conjunction with the state fair.

Yearly features at the fair include a wide variety of vendors, many local and national bands, the Kids From Wisconsin, and a large assortment of food and drink, including cream puffs, which are one of the fair's most popular attractions. In 2010, the Wisconsin State Fair introduced Comet 2, a forty-foot roller coaster. New in 2012, the Wisconsin State Fair took over the Midway, creating Spin City, a collection of independently contracted rides including the Sizzler, the Freak Out, and the Stratosphere, a 200-foot-tall swing ride.

The Main Stage features headline performance every evening of the fair. Many local bands can also be seen on smaller stages and pavilions located throughout the grounds.

Agricultural exhibits of horses, cattle, sheep, chickens and other animals are featured every year at the fair.

All content from Kiddle encyclopedia articles (including the article images and facts) can be freely used under Attribution-ShareAlike license, unless stated otherwise. Cite this article:
Wisconsin State Fair Facts for Kids. Kiddle Encyclopedia.