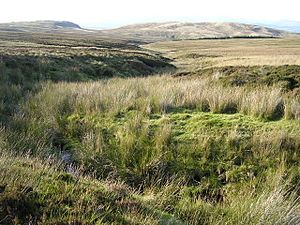 The Wolf Burn is a small stream, running from a suspect subterranean source behind the Ormlie housing estate in Thurso, Highland Region in the United Kingdom. Its issue is by Burnside, Caithness. A ribble of stones represents the Wolfburn distillery which operated for a number of decades around the mid 19th Century.

It is currently under threat from the local council who are planning on building a road that would destroy all the remains along with the plethora of wildlife including nesting sites of the endangered Skylark.

All content from Kiddle encyclopedia articles (including the article images and facts) can be freely used under Attribution-ShareAlike license, unless stated otherwise. Cite this article:
Wolf Burn Facts for Kids. Kiddle Encyclopedia.