The Woodbury–Story House is a National Register of Historic Places structure (site #93001463) in Altadena, California. It was placed on the Register in 1993 for its significance as an example of Italianate and Colonial Revival architecture styles and its association with Capt. Frederick Woodbury, one of the founders of Altadena.

The home was built in 1882 for Capt. Frederick Woodbury, and his wife, Martha. The home was the headquarters for a ranch that included a two-story bunkhouse for the ranch hands. Citrus groves and vineyards were planted on the land. Capt. Woodbury planted the deodar cedars that line the contemporary Santa Rosa Ave., also known as Christmas Tree Lane, another National Register site. In 1892, Capt. Woodbury sold the home to a man named Walker, who in turn sold it to Hampton L. Story in 1894. During the decades following Story's death, the home became a coffee shop, sheriff's station, a fire engine house, office building and a tea house. 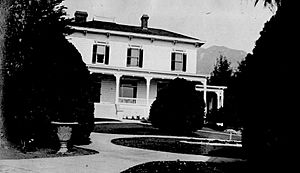 The Woodbury-Story House was used as a filming location in the season 7 episode of American Horror Story entitled "Winter of Discontent". It aired on October 24, 2017, on the cable network FX.

The paranormal reality television series Ghost Adventures covered the story of the Woodbury-Story House, in the episode "The Woodbury: Home of American Horror Story" on the Travel Channel in 2019.

All content from Kiddle encyclopedia articles (including the article images and facts) can be freely used under Attribution-ShareAlike license, unless stated otherwise. Cite this article:
Woodbury–Story House Facts for Kids. Kiddle Encyclopedia.