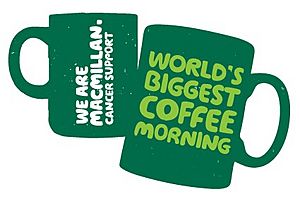 The official partner of Coffee Morning is Marks & Spencer. Since 2010, Marks & Spencer has raised £10 million by creating limited edition homeware products and selling a range of baked goods, and donating some of the money they make from them to Macmillan Cancer Support.

All content from Kiddle encyclopedia articles (including the article images and facts) can be freely used under Attribution-ShareAlike license, unless stated otherwise. Cite this article:
World's Biggest Coffee Morning Facts for Kids. Kiddle Encyclopedia.