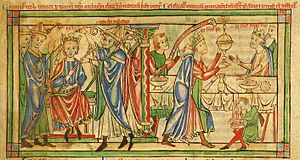 Since the reign of the first kings of England the question of who should rule next has been hard to answer. Examples of this are when Edward the Elder died leaving two sons Aelfward and Athelstan, but Aelfward died 28 days after Edward leaving the throne to Athelstan. But when a king picked his successor in the 1100's it was known as the young king. The next king, the prince of Wales usually got to reign as the young king of England before his ascension but both of the young/junior/titular kings never ascended to the throne.

The young kings of England in order of reign were: 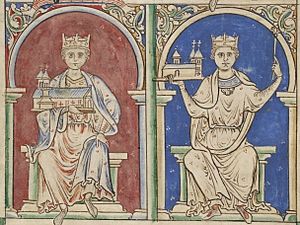 Ever since Henry the Young the next in line has never been crowned as young king and just simply prince of Wales or just titled as "the rightful heir to the English throne".

For kings of England, see List of English monarchs.

All content from Kiddle encyclopedia articles (including the article images and facts) can be freely used under Attribution-ShareAlike license, unless stated otherwise. Cite this article:
Young kings of England Facts for Kids. Kiddle Encyclopedia.