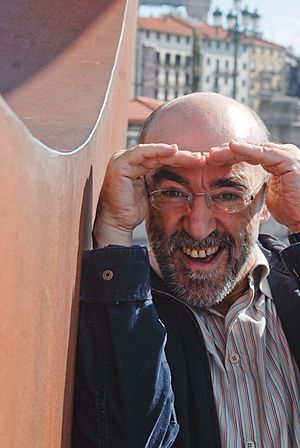 Alejandro "Álex" Angulo León (12 April 1953 - 20 July 2014) was a Spanish actor. He was born in Erandio. He performed in over sixty movies during his career. He was an actor for more than 30 years. He was known for his role as Doctor Ferreiro in Pan's Labyrinth.

He died in Fuenmayor at the age of 61 when the vehicle in which he was travelling veered from the road.

All content from Kiddle encyclopedia articles (including the article images and facts) can be freely used under Attribution-ShareAlike license, unless stated otherwise. Cite this article:
Álex Angulo Facts for Kids. Kiddle Encyclopedia.