Òran Mór (Scottish Gaelic: "great melody of life" or "big song") is a theatre, restaurant, entertainment and music venue in Glasgow. From 1862 until 1978 the building was the Kelvinside Parish Church (Botanic Gardens) before becoming redundant and then converted into an entertainment venue in 2004. 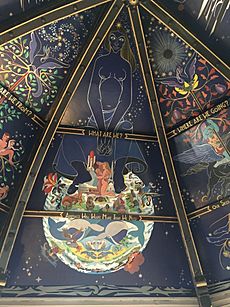 The murals added during the conversion in the auditorium

In 2002, works commenced to refurbish the building and turn it into an arts and leisure centre, with it being renamed Òran Mór. The building was opened in June 2004.

All content from Kiddle encyclopedia articles (including the article images and facts) can be freely used under Attribution-ShareAlike license, unless stated otherwise. Cite this article:
Òran Mór Facts for Kids. Kiddle Encyclopedia.