Ōwhango was a station on the North Island Main Trunk line, in the Ruapehu District of New Zealand. It served the village of Ōwhango, which lay to the north of the station. It was 5.64 km (3.50 mi) north of Oio and 9.11 km (5.66 mi) south of Kakahi. The Public Works Department transferred the station to NZ Railways on 9 November 1908, though bush had been felled along the railway route in 1904, by March 1905 a station yard was being formed and by August 1905 it was the railhead, with track laid 4 mi (6.4 km) beyond to the south. 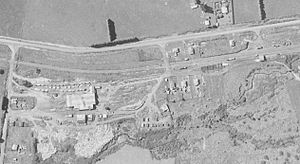 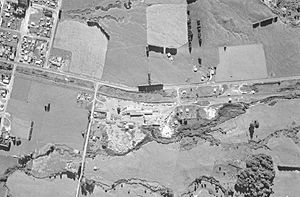 Passenger traffic had ceased by 1976. On 2 June 1985 Ōwhango closed to goods too, though the crossing loop remains in use.

All content from Kiddle encyclopedia articles (including the article images and facts) can be freely used under Attribution-ShareAlike license, unless stated otherwise. Cite this article:
Ōwhango railway station Facts for Kids. Kiddle Encyclopedia.