This terrace was built c. 1910 as part of the post-plague redevelopment. An 1880 plan shows a two-storey hotel on this site.

In 1958 architect John Fisher (member of the Institute of Architects, the Cumberland County Council Historic Buildings Committee and on the first Council of the National Trust of Australia (NSW) after its reformation in 1960), with the help of artist Cedric Flower, convinced Taubmans to paint the central bungalow at 50 Argyle Place. This drew attention to the importance of The Rocks for the first time. As a result, Fisher was able to negotiate leases for Bligh House (later ClydeBank) and houses in Windmill Street for various medical societies.

First tenanted by the NSW Department of Housing in 1982. 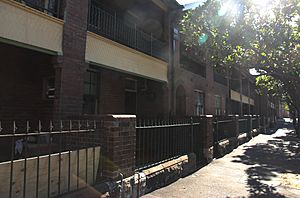 A row of the terrace houses comprising 1-63 Windmill Street, pictured in 2019.

The external condition of the building is good.

As at 23 November 2000, 1-63 Windmill Street is an extensive group of Federation style terraces in very good condition, having high streetscape value.

All content from Kiddle encyclopedia articles (including the article images and facts) can be freely used under Attribution-ShareAlike license, unless stated otherwise. Cite this article:
1-63 Windmill Street, Millers Point Facts for Kids. Kiddle Encyclopedia.