The 10th Ward is one of the city's Uptown wards, formerly the old Faubourg Lafayette annexed by New Orleans in 1850s. 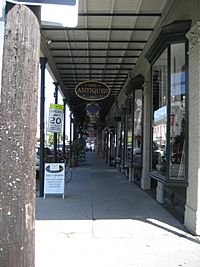 Row of shops along lower Magazine Street in the 10th Ward

Near the river the Ward includes part of the Lower Garden District and the former location of America's first experiment with large-scale public housing, started here in 1937, when, as part of the New Deal, President Roosevelt signed the loan to commence construction of the St. Thomas Housing Project. In Central City it includes the Oretha Castle Haley commercial district.

The 10th Ward has been home to such notables as jazz musicians Buddy Bolden and George Brunies.

All content from Kiddle encyclopedia articles (including the article images and facts) can be freely used under Attribution-ShareAlike license, unless stated otherwise. Cite this article:
10th Ward of New Orleans Facts for Kids. Kiddle Encyclopedia.