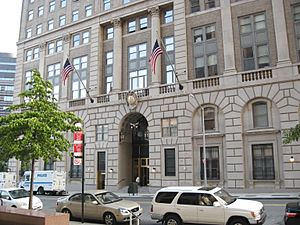 The building was designed by the architectural firm McKim, Mead & White, and was built in 1926 to serve as the headquarters for the Elks organization, including amenities such as a pool, banquet hall, and bowling alleys. The building has a limestone and terra cotta facade, with Renaissance-revival style features including balustrades, egg-and-dart ornamentation, and Corinthian columns.

In 2003, the City of New York sold the building to Two Trees Management, a primary developer of the DUMBO neighborhood, for development as luxury residential apartments, as part of development efforts taking place throughout Downtown Brooklyn. Several floors were added to the structure, and the courtyard was decorated with a trompe-l'œil mural of architectural features by muralist Richard Haas. The interior lobby space, including a coffered ceiling, has been restored by the architecture firm Beyer Blinder Belle, and a historic theater space on the ground floor is intended to be used by ISSUE Project Room, a local arts organization.

All content from Kiddle encyclopedia articles (including the article images and facts) can be freely used under Attribution-ShareAlike license, unless stated otherwise. Cite this article:
110 Livingston Street Facts for Kids. Kiddle Encyclopedia.