120 Wall Street is a skyscraper in the Financial District of Lower Manhattan in New York City, and was completed in 1930. The building is 399 ft (122 m) tall, has 34 floors, and is located on the easternmost portion of Wall Street, and also borders Pine Street and South Street. The architect was Ely Jacques Kahn of Buchman & Kahn.

Greenmal Holding Corporation announced that it had obtained a loan in February 1929 to build the building. The cost was estimated at $12,000,000, with the edifice resting upon a fifty-one caisson foundation. Designed by Buchman & Kahn, the building was planned to occupy a 23,000-square-foot (2,100 m2) plot. T. Greenberg and Malzmal purchased the property in 1928 from the American Sugar Company. 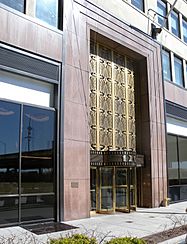 The building opened in March 1930, and the original anchor tenant of the building was the American Sugar Refining Company.

120 Wall Street was the only major high-rise building on the East River downtown waterfront for many years until the post-1970s construction boom.

Since 1980, the building has been owned by the 120 Wall Company, LLC, an affiliate of Silverstein Properties Inc., who purchased it for a reported $12 million.

The tower is tiered on three sides, forming the "wedding-cake" architecture of a New York setback skyscraper. The setbacks recede in shallow formations from a large 16-story platform. Red-granite panels frame wide-paned commercial windows at street level as part of the five-story limestone base.

All content from Kiddle encyclopedia articles (including the article images and facts) can be freely used under Attribution-ShareAlike license, unless stated otherwise. Cite this article:
120 Wall Street Facts for Kids. Kiddle Encyclopedia.