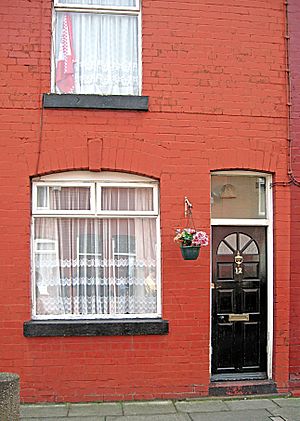 12 Arnold Grove is a house near Picton Clock Tower in the Liverpool suburb of Wavertree. The house is the birthplace and childhood home of former Beatle George Harrison.

Harrison lived in the property for six years, by which time his family had been living there for nearly 20 years. They finally moved out to a new council estate in Speke on 2 January 1950. His eldest brother Harry recalled: "Our little house was just two rooms up and two rooms down, but, except for a short period when our father was away at sea, we always knew the comfort and security of a very close-knit home life."

Harrison recalled the only heating was a single coal fire, and the house was so cold in winter that he and his brothers dreaded getting up in the morning because it was freezing cold and they had to use the outside toilet. The house had tiny rooms – only ten feet by ten (100 ft2, about 9 m2) – and a small iron cooking stove in the back room, which was used as a kitchen. Describing the back garden, Harrison wrote it had "a one-foot wide flowerbed, a toilet, a dustbin fitted to the back wall (and) a little hen house where we kept cockerels."

Harrison once said of the house, "Try and imagine the soul entering the womb of a woman living at 12 Arnold Grove, Wavertree, Liverpool 15. There were all the barrage balloons, and the Germans bombing Liverpool. All that was going on. I sat outside the house a couple of years ago, imagining 1943, nipping through the spiritual world, the astral level, getting back into a body in that house. That really is strange when you consider the whole planet, all the planets there may be on a spiritual level. How do I come into that family, in that house at that time, and who am I anyway?"

All content from Kiddle encyclopedia articles (including the article images and facts) can be freely used under Attribution-ShareAlike license, unless stated otherwise. Cite this article:
12 Arnold Grove Facts for Kids. Kiddle Encyclopedia.