Wavertree is a district of Liverpool, England. It is a ward of Liverpool City Council, and its population at the 2011 census was 14,772. Located to the south and east of the city centre, it is bordered by various districts and suburbs such as Childwall, Edge Hill, Fairfield, Mossley Hill, Old Swan, and Toxteth. 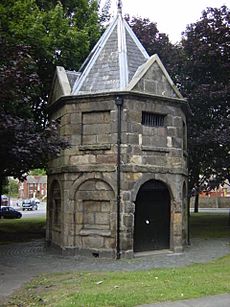 The name derives from the Old English words wæfre and treow, meaning "wavering tree", possibly in reference to aspen trees common locally. It has also been variously described as "a clearing in a wood" or "the place by the common pond". In the past the name has been spelt Watry, Wartre, Waurtree, Wavertre and Wavertree. The earliest settlement of Wavertree is attested to by the discovery of Bronze Age burial urns in Victoria Park in the mid-1880s. The Domesday Book reference is "Leving held Wauretreu. There are 2 carucates of land. It was worth 64 pence".

Wavertree was part of the parish of Childwall in the West Derby hundred.

Wavertree also boasts a village lock-up, commonly known as The Roundhouse, despite being octagonal in shape. Built in 1796, and later modified by prominent local resident and architect Sir James Picton, it was once used to detain local drunks. The lock-up was made a listed building in 1952. A similar structure, Everton Lock-Up sometimes called Prince Rupert's Tower, survives in Everton. The village green, on which Wavertree's lock-up was built, is officially the only surviving piece of common land in Liverpool.

Holy Trinity Church was built in 1794 and is situated on Church Road close to the famous Blue Coat School.

Wavertree Town Hall was built in 1872 as the headquarters of the Wavertree Local Board of Health. The motto on the town hall is sub umbra floresco or "I flourish in the shade". Rescued from demolition in 1979, the town hall is now a pub.

In 1895, the village of Wavertree was incorporated into the city of Liverpool.

Wavertree is one of the areas in south Liverpool populated by students of Liverpool's three universities, especially the Smithdown Road area. This road is known for "The Smithdown Ten" pub crawl, although the number of pubs in business varies year to year.

The Mystery was one of the first purpose-built public playgrounds in the UK, opened in 1895. It is based on land donated to Liverpool Corporation by an anonymous donor, to be a venue for organised sports, and a place for children from the city's schools to run about in, not a park for 'promenading' in the Victorian tradition. It is known locally as "The Mystery" because the donor remains a mystery.

The donor expressed the hope that the City Council "might approve of giving it a fair trial for this purpose... before appropriating it for any other use". The land is currently home to a playground, Wavertree Athletics Centre, with many sports facilities including tennis courts, all-weather pitch, bowling green and athletic track with grandstand, and Liverpool Aquatics Centre, with two swimming pools, sports hall, and Lifestyles Fitness Centre. Liverpool Harriers & A.C. have based their headquarters at this centre since 1990.

There are a number of both primary and secondary schools in this densely populated area of Liverpool. In addition to the aforementioned Blue Coat School, Royal School for the Blind, and King David High School, there is also Wavertree Church of England School, which was renamed from Trinity District in the 1990s. The school celebrated its 150th birthday in September 2017. There is another primary school on South Drive called Our Lady of Good Help. This used to be located in Chestnut Grove next to our Lady's Roman Catholic Church, which is now facing re-development. St Clare's Roman Catholic Primary School is also situated off Smithdown Road.

All content from Kiddle encyclopedia articles (including the article images and facts) can be freely used under Attribution-ShareAlike license, unless stated otherwise. Cite this article:
Wavertree Facts for Kids. Kiddle Encyclopedia.