Katarina Mary Johnson-Thompson (born 9 January 1993) is an English heptathlete. She won the gold medal at the 2019 World Championships and broke the British record with a score of 6,981 points, which ranks her at No. 6 on the all-time heptathlon lists. She also holds the British record of 5,000 points for the women's pentathlon and won gold in that event at the 2015 and 2019 European Indoor Championships, as well as the 2018 World Indoor Championships. In the long jump, she was the 2012 World Junior Champion and the 2014 World Indoor silver medalist. She also holds the British high jump records with 1.98 m outdoors (2016) and 1.97 m indoors (2015).

Katarina Mary Johnson-Thompson was born in the Liverpool suburb of Woolton on 9 January 1993, the daughter of Tracey Johnson and Ricardo Thompson (died November 2017). Her mother is a former dancer from Liverpool, while her father was a production assistant for ZNS-TV in the Bahamas. She spent the first year of her life in Nassau with her father after her parents separated and then joined her mother in the town of Halewood near Liverpool, where she attended St Mark's Catholic Primary School and became interested in athletics. She later returned to Woolton, where she attended St Julie's Catholic High School and became close friends with future actress Jodie Comer, and went on to study sports science at Liverpool John Moores University.

Johnson-Thompson represents Liverpool Harriers and was formerly coached by Mike Holmes. Her development was in part funded by the Wells Sports Foundation set up by Barrie Wells, which gave her access to the foundation's patron, Jessica Ennis (now Dame Jessica Ennis-Hill).

At the 2009 World Youth Championships in Athletics in Brixen, Italy, she won the gold medal in the heptathlon. She missed most of the 2010 athletics season suffering from patellar tendinopathy, also known as jumper's knee.

Johnson-Thompson broke Jessica Ennis' British junior record at the Multistars competition held in Desenzano del Garda, Italy in May 2012. Her score of 6007 points was enough to take third position at the event behind Sofía Ifadídou of Greece and French athlete Blandine Maisonnier. The score also meant she had surpassed the 'B' qualifying standard for the 2012 Olympics, however it fell short of the 6,150 points 'A' standard. In June 2012 Johnson-Thompson achieved the 'A' qualifying standard for the 2012 Olympics by scoring a new personal best of 6,248 points at the TNT – Fortuna Meeting held in the Sletiště Stadium, Kladno, Czech Republic. At the meeting she set six new personal bests across the seven events to beat her previous best score by 241 points.

At the 2012 World Junior Championships in Athletics held in Barcelona, Johnson-Thompson chose not to compete in the full heptathlon competition to save herself for the Olympics; instead she took part in the long jump—winning a gold medal with a jump of 6.81 metres—and the 100 metres hurdles.

In early April 2012, alongside Tiffany Porter and Yamilé Aldama, she was nominated for "European Athlete of the Month" for March.

Johnson-Thompson competed for Great Britain at the 2012 Summer Olympics in the women's heptathlon alongside compatriots Jessica Ennis and Louise Hazel at the Olympic Stadium on 3–4 August 2012. She finished in 13th place with a score of 6267.

In September, Johnson-Thompson was nominated for the "European Athletics Rising Star award". In October, she won the "Lillian Board Memorial Award" (for junior women) at the 2012 British Athletics Writers' Association Awards.

In the 2013 IAAF World Championships heptathlon, Johnson-Thompson finished in 5th place. After a first day which left her in 5th place, with a PB in the 200 m, she had an excellent second day with PB's in the Long Jump, Javelin and the 800 m. However, she admitted afterwards that she wished she had set her target of finishing in the Top 8 with more ambition, having finished just 28 points away from bronze medallist Dafne Schippers.

On 11 July 2014, Johnson-Thompson set a new long jump personal best of 6.92 m at the Glasgow Diamond League meeting, taking her to number 2 on the British all-time list for the event. Johnson-Thompson won gold at the 2014 edition of the prestigious heptathlon Hypo-Meeting in Götzis with a world leading personal best score of 6682 but missed the Commonwealth Games and the European Championships after suffering a foot injury.

Johnson-Thompson set a new British high jump record with a height of 1.97 metres at the British Indoor Championships in Sheffield on 14 February 2015, surpassing her previous record of 1.96 metres set on 8 February 2014. Prior to Johnson-Thompson, Debbie Marti's 1.95-metre jump had held the record since 1997.

On 21 February 2015, Johnson-Thompson set a new indoor British long jump record with a distance of 6.93 m at the Birmingham Indoor Grand Prix.

In August 2015, Johnson-Thompson finished in 28th place in the heptathlon at the 2015 World Championships in Beijing after three foul jumps in the long jump. She had been lying in second place to Jessica Ennis-Hill after the first day of events.

Johnson-Thompson competed at the 2016 Hypo-Meeting in May of that year, her first major competition since undergoing knee surgery in the autumn of 2015: she finished the competition in sixth with a score of 6,304 points, securing her place at the 2016 Summer Olympics by beating the qualifying standard of 6,200 points.

She missed out on a medal at the Games, taking sixth in the heptathlon, although her performance in the heptathlon high jump of 1.98 m set a new British high jump record, and would have been good enough to take gold in the stand-alone Olympic high jump competition.

In September 2016, UK Athletics confirmed that Johnson-Thompson had split with coach Mike Holmes, having been trained by him since 2008.

On 5–6 August 2017, Johnson-Thompson competed in the heptathlon at the 2017 World Championships in Athletics held in London. After moving to Montpellier, she was expected to land a podium position but was not able to surpass the 1.86 barrier in the heptathlon's high jump, with a successful jump at 1.80 m, which gave her 978 points. In a post heptathlon Day 1 interview, she stated: "High jump is one of my best events, I lost 200 points in just one event so that's massive. I'm massively disappointed but I'm trying to move on. In Day 2, long jump is one of my good events so hopefully I can do well there". Johnson-Thompson finished in 5th place with 6558 points. She also competed in the single high jump event, finishing fifth with a Season's Best jump at 1.95 m.

Johnson-Thompson won the 2018 World indoor pentathlon title and the 2018 Commonwealth Games heptathlon titles, before going on to win a silver medal behind World and Olympic champion Nafi Thiam in the heptathlon at the 2018 European Championships, recording a personal best score of 6759 points, to move into the world all-time Top 25.

In May 2019, at the 45th Hypomeeting in Götzis, Johnson-Thompson recorded a new personal best of 6,813 in the Heptathlon, taking her up to 18th on the world all-time list.

She won the heptathlon 2019 World Athletics Championships in Doha, Qatar with a British record of 6981 points.

Johnson-Thompson moved to Montpellier in 2016, and currently splits her time between Montpellier and her home city of Liverpool. She is a lifelong fan of local team Liverpool F.C. She has been in a relationship with fellow athlete Andrew Pozzi since 2018. 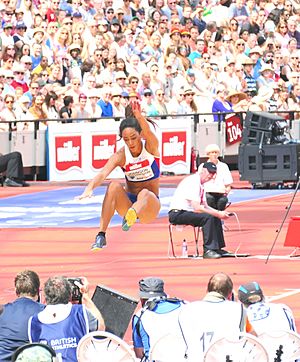 Katarina Johnson-Thompson competes in the Long Jump event at the Anniversary Games in London, July 2016

All content from Kiddle encyclopedia articles (including the article images and facts) can be freely used under Attribution-ShareAlike license, unless stated otherwise. Cite this article:
Katarina Johnson-Thompson Facts for Kids. Kiddle Encyclopedia.