Dame Jessica Ennis-Hill DBE (born 28 January 1986) is a retired British track and field athlete from England, specialising in multi-eventing disciplines and 100 metres hurdles. As a competitor in heptathlon, she is the 2012 Olympic champion, a three-time world champion (2009, 2011, 2015), and the 2010 European champion. She is also the 2010 world indoor pentathlon champion. 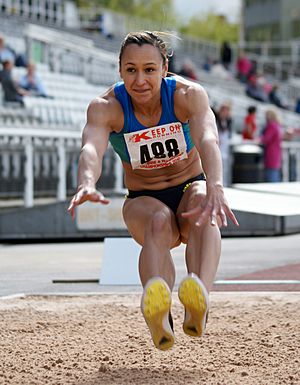 Born in Sheffield on 28 January 1986, Ennis-Hill is one of two daughters of Vinnie Ennis and Alison Powell. She has a younger sister, Carmel. Her father is a Jamaican self-employed painter and decorator, while her English mother is a social worker from Derbyshire. Her father did some sprinting at school, whilst her mother favoured the high jump.

They introduced her to athletics by taking her to a Start:Track event at Sheffield's Don Valley Stadium during the 1996 school summer holidays. She won her first athletics prize there, which was a pair of trainers. More importantly, it was there that she met Toni Minichiello, the man who was to become her coach.

Ennis-Hill took to the sport immediately and joined the City of Sheffield and Dearne Athletic Club the following year, aged 11. In November 2000, aged 14, she won the Sheffield Federation for School Sports Whitham Award for the best performance by a Sheffield athlete at the National Schools Championships, where she won the high jump competition.

Growing up in the Highfield area of Sheffield, Ennis attended Sharrow Primary School and King Ecgbert School in Dore, where she did her GCSEs and stayed on in the sixth form to gain three A-Levels, before going on to study psychology at the University of Sheffield and graduating in 2007.

Ennis competed at the 2003 World Youth Championships in Sherbrooke, Quebec, Canada in July, where after leading at the end of the first day she finished in fifth position with 5,311 points.

The following year Ennis competed in the 2004 World Junior Championships in Grosseto, Italy, where she finished eighth with 5,542 points, again after leading at the end of the first day.

Ennis won two silver medals, in the 100 m hurdles and the high jump, at the 2004 Commonwealth Youth Games in Bendigo, Australia, held in November and December 2004, and won the heptathlon at the July 2005 European Athletics Junior Championships in Kaunas, Lithuania, with a British junior record score of 5,891 points.

Ennis's first senior international competition was the 2005 Universiade, held in August in İzmir, Turkey, where she won a bronze medal in the heptathlon with a new personal best of 5,910 points.

At the July 2005 AAA Championships Ennis competed in the 100 m hurdles, in which she recorded a personal best, and the high jump. 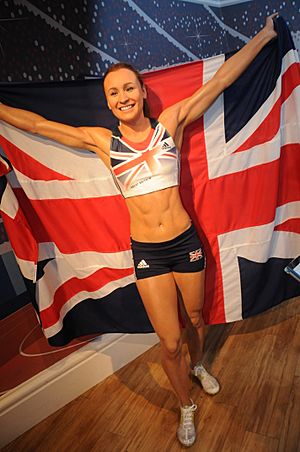 Ennis-Hill was appointed Dame Commander of the Order of the British Empire (DBE) in the 2017 New Year Honours for services to athletics.

Ahead of the 2017 World Athletics Championships in London, Ennis-Hill filmed a special programme for the BBC, entitled 'Jessica Ennis-Hill and the Next Generation', in which she met some of the rising stars of British athletics. She was also a guest analyst on the BBC's coverage for the first three days of the event. 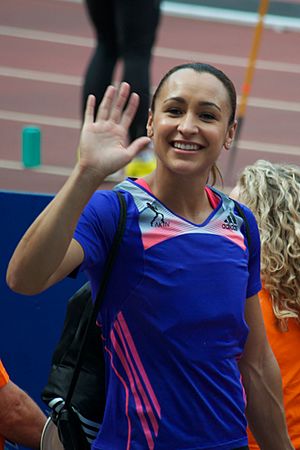 Ennis lives in Sheffield. She married Andy Hill in Derbyshire in May 2013 and said she would be known as Jessica Ennis-Hill.

She is a fan of Sheffield United, which named one stand of the Bramall Lane stadium in her honour in 2012, but renamed it after a sponsor three years later.

Ennis-Hill is an ambassador for the Jaguar Academy of Sport and a patron of both the Sheffield Children's Hospital charity and Barrie Wells' sports foundation. She is a columnist for The Times newspaper and advertises Aviva, Powerade, BP, Adidas, Omega watches, Olay Essentials, and Santander UK.

All content from Kiddle encyclopedia articles (including the article images and facts) can be freely used under Attribution-ShareAlike license, unless stated otherwise. Cite this article:
Jessica Ennis-Hill Facts for Kids. Kiddle Encyclopedia.