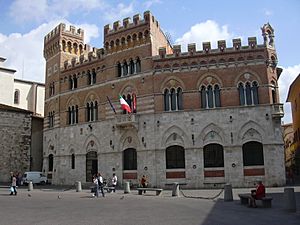 The Palazzo Comunale in Grosseto

Grosseto is a town in the central Italian region of Tuscany. It is the capital of the Province of Grosseto. The city is 12km from the Tyrrhenian Sea. It is in the Maremma near the Ombrone river. Grosseto has 80,742 people. It is a small city but the province is the largest of the Tuscany. It's very comfortable because there is the sea near it. 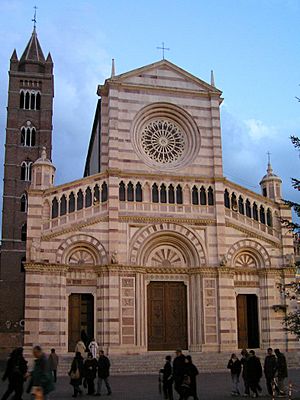 The Cathedral of Grosseto

All content from Kiddle encyclopedia articles (including the article images and facts) can be freely used under Attribution-ShareAlike license, unless stated otherwise. Cite this article:
Grosseto Facts for Kids. Kiddle Encyclopedia.