Kids Encyclopedia Facts
This page is about the district of Liverpool. For the football club, see Everton F.C.. For the ward, see Everton (ward).

Everton is a district in Liverpool, in Merseyside, England, in the Liverpool City Council ward of Everton. It is part of the Liverpool Walton Parliamentary constituency. Historically in Lancashire, at the 2001 Census the population was recorded as 7,398, increasing to 14,782 at the 2011 Census.

The name Everton is derived from the Saxon word eofor, meaning "wild boar that lives in forests".

2003 View of the city from Everton Park

Everton is an inner city area located just north of Liverpool city centre, with Vauxhall to the west, Kirkdale to the north and Anfield to the north east. The Liverpool entrance to the Kingsway Tunnel is located near the boundaries of this area. Everton consists of generally more modern terraced homes and is statistically one of the most deprived areas of the city. Urban clearance during the 1960s and 1970s, followed by the creation of Everton Park, changed the face of the area and some parts have never recovered. The population has plummeted by over 100,000 since the 1960s and Everton Park has replaced the densely packed streets with fields and trees. The landscape of Everton is now mainly non urban with the loss of so many people and many hundreds of buildings

Project Jennifer" is a scheme to breathe new life into rundown parts of Everton centred on Great Homer Street including a revamped ' Greaty' market. However the project has suffered numerous delays and setbacks. The NSPCC Hargreaves Centre (named after locally born benefactor John Hargreaves) was opened in May 2007 on the site of the former indoor market.

Everton is an ancient settlement and like Liverpool, was one of the six unnamed berewicks of West Derby. Until the late 18th century Everton was a small rural parish of Walton-on-the-Hill, but the rise in wealth of nearby Liverpool pushed wealthier merchants further afield to live. By the early 19th century however an increase in slums and demand for housing saw Everton began to be built up and in 1835, Everton became part of Liverpool. Much of the land in Everton was once owned by the local Hodson family. 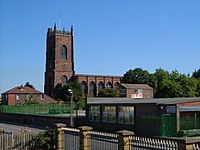 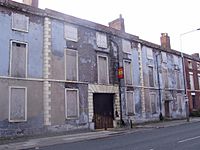 The football club Everton F.C. is named after the area, St. Domingo Methodist Chapel was in Everton; St. Domingo FC being the original name of the club. The district is also the location of a building on the club's crest, Everton Lock-Up, known locally as Prince Rupert's Tower. Barker and Dobson, a local sweet manufacturer, introduced "Everton Mints" to honour Everton Football Club.

Ironically, Everton F.C. have never actually played in the area. Their first three homes were located in Anfield including Stanley Park and since 1892 at Goodison Park in the area of Walton. In addition, Everton Cemetery is also not located in Everton, it lies further north-east in the district of Fazakerley.

The book Her Benny by Silas Hocking was mainly set in Everton and dealt with child poverty in the early 1900s.

All content from Kiddle encyclopedia articles (including the article images and facts) can be freely used under Attribution-ShareAlike license, unless stated otherwise. Cite this article:
Everton, Liverpool Facts for Kids. Kiddle Encyclopedia.