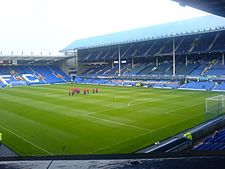 Goodison Park is the stadium of the English football club Everton FC and is in the heart of the City of Liverpool. Everton FC is one of the founder members of the football league and holds the record as the longest serving football club in the top tier of English Football.

All content from Kiddle encyclopedia articles (including the article images and facts) can be freely used under Attribution-ShareAlike license, unless stated otherwise. Cite this article:
Goodison Park Facts for Kids. Kiddle Encyclopedia.