15th Street–Prospect Park is a local station on the IND Culver Line of the New York City Subway. Located at 15th Street east of Prospect Park West in the Windsor Terrace and Park Slope neighborhoods in Brooklyn, it is served by the F and G trains at all times.

This underground station, opened on October 7, 1933, has two tracks and one island platform. The Culver Line's express tracks run underneath in a different alignment, crossing directly under Prospect Park and are not visible from the platforms. Due to the alignment of the street grid, the station and tunnel were constructed about 100 feet (30 m) east of Prospect Park West, rather than directly under any street. This station was added to the U.S. National Register of Historic Places in 2005.

One of the goals of Mayor John Hylan's Independent Subway System (IND), proposed in the 1920s, was a line to Coney Island, reached by a recapture of the BMT Culver Line. As originally designed, service to and from Manhattan would have been exclusively provided by Culver express trains, while all local service would have fed into the IND Crosstown Line. The line was extended from Bergen Street to Church Avenue on October 7, 1933, including the 15th Street–Prospect Park station.

Upon the station's completion, it served Windsor Terrace, a mostly residential area with brownstones and row houses occupied by European immigrants. It was also directly adjacent to Prospect Park and close to Green-Wood Cemetery. This station was added to the National Register of Historic Places on July 27, 2005.

The station was originally served by the A train. In 1936, the A was rerouted to the IND Fulton Street Line and was replaced by E trains from the Queens Boulevard Line. In 1937, the connection to the IND Crosstown Line opened and GG (later renamed the G) trains were extended to Church Avenue, complementing the E. In December 1940, after the IND Sixth Avenue Line opened, E trains were replaced by the F, and the GG was cut back to Smith–Ninth Streets. Following the completion of the Culver Ramp in 1954, D Concourse Express trains replaced F service to Coney Island. In November 1967, the Chrystie Street Connection opened and D trains were rerouted via the Manhattan Bridge and the BMT Brighton Line to Coney Island. F trains were extended once again via the Culver Line.

The station acted as a local-only station from 1968 to 1976, when F trains ran express in both directions between Bergen Street and Church Avenue during rush hours. G trains were extended from Smith–Ninth Streets to Church Avenue to provide local service. Express service between Bergen and Church ended in 1976 due to budgetary concerns and passenger complaints, and the GG, later renamed the G, was again terminated at the Smith–Ninth Streets station.

In July 2009, the G was extended from its long-time terminus at Smith–Ninth Streets to a more efficient terminus at Church Avenue to accommodate the rehabilitation of the Culver Viaduct. The G extension was made permanent in July 2012. In July 2019, the MTA revealed plans to restore express service on the Culver Line between Jay Street and Church Avenue. Express service started on September 16, 2019. 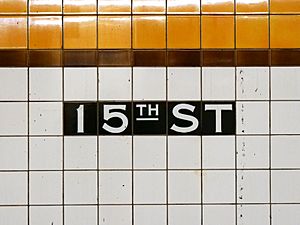 Both trackside walls have an orange-yellow trim line with a medium red-brown border with small black and white "15TH ST" tile captions below it at regular intervals. The tile band is set in a three-high course, a pattern usually reserved for express stations. The tile color was part of a color-coded tile system for the entire Independent Subway System. Ventilation grates are located along the trackside walls. A row of large, white tiled columns runs along either side of the platform and the mezzanine above at 15-foot (4.6 m) intervals. Alternating columns carry the standard black-and-white station name plate. The ceiling of the platform level is held up by H-shaped piers located every 15 feet (4.6 m), which support girders underneath the mezzanine. The roof girders are also connected to columns in the trackside walls.

The tunnel is covered by a "U"-shaped trough that contains utility pipes and wires. The outer walls of this trough are composed of columns, spaced approximately every 5 feet (1.5 m) with concrete infill between them. There is a 1-inch (25 mm) gap between the tunnel wall and the trackside wall, which is made of 4-inch (100 mm)-thick brick covered over by a tiled finish.

The narrow mezzanine is full-length, sparsely decorated with plain tiling typical of the IND, and allows out-of-system walking from one end to the other. Six staircases lead from the platform to the mezzanine. The area inside the fare control area is split into two sections, one considerably smaller than the other.

All content from Kiddle encyclopedia articles (including the article images and facts) can be freely used under Attribution-ShareAlike license, unless stated otherwise. Cite this article:
15th Street–Prospect Park station Facts for Kids. Kiddle Encyclopedia.