The number of the total medals of each country during the 2016 Summer Olympics.

The following medal table is a list of National Olympic Committees (NOCs) and one non-NOC team ranked by the number of gold medals won by their athletes during the 2016 Summer Olympics in Rio de Janeiro, from 5 to 21 August 2016.

Vietnam, Kosovo, Fiji, Singapore, Puerto Rico, Bahrain, Jordan, Tajikistan and Ivory Coast won their first Olympic gold medals (however, Bahrain retroactively won a gold medal for the 2012 Summer Olympics due to medals reallocation). They were also Kosovo's, Fiji's, and Jordan's first Olympic medals of any kind. Kuwaiti shooter Fehaid Al-Deehani became the first independent athlete to win a gold medal, though gold medals have been won under the Olympic flag by other entities, such as countries that competed under the flag at 1980 Summer Olympics in Moscow or the Unified Team in 1992.

The United States of America led the medal table both in number of gold medals won (as the medals are listed on the official website of the Games, and internationally by tradition), and in overall medals (the traditional method by which the table is listed in the United States), winning 46 gold and 121 total medals respectively. Behind the United States, Great Britain were second on the medal table by golds (27), and third by overall medals (67) – their highest finish in the former case since the home games of 1908 and in the latter since 1920, while China were third by golds (26), but second by overall medals (70). Both countries were well clear of a group of challengers for fourth in the table including Russia, Germany, France and 2020 hosts Japan.

Athletes from 87 nations earned medals at the 2016 Summer Olympics, breaking the record of most nations winning a medal at a single edition of the Olympics. However, following reallocation due to doping sanctions, an 87th country was later awarded a medal at the 2008 Olympics, tying the record. Athletes from 59 nations earned gold medals at these games, also breaking the record for the most nations winning gold at a single games. Host country Brazil won seven gold medals, their most at any single Summer Olympics.

Representative set of the Olympic medals

The design for the Olympic medals for the 2016 Summer Olympics featured the largest medals in terms of diameter of any medal presented at the Olympics. The golds are purer than any presented at all preceding Olympics. The silvers were made from recycling mirrors, solder, and X-ray plates. Much of the copper used in the bronzes came from recycling waste from the mint that minted the medals. The obverse of the medals features Nike, the Greek goddess of victory. 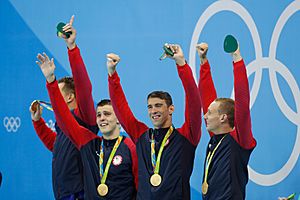 The American final team (Adrian, Held, Phelps, and Dressel), after winning the 4 × 100 m freestyle relay at the 2016 Olympics. 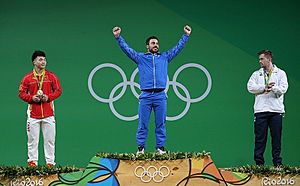 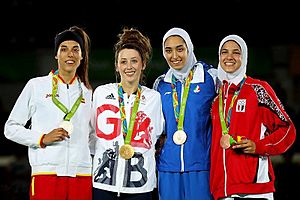 This is the table of the medal count of the 2016 Summer Olympics, based on the medal count of the International Olympic Committee (IOC). These rankings sort by the number of gold medals, earned by a National Olympic Committee (NOC). The number of silver medals is taken into consideration next and then the number of bronze medals. If, after the above, countries are still tied, equal ranking is given and they are listed alphabetically by IOC Country Code. Although this information is provided by the IOC, the IOC itself does not recognize or endorse any ranking system.

The 2016 Summer Olympic program featured 28 sports with 41 disciplines, and a total of 306 events, tentatively resulting in 306 medal sets to be distributed. Athletes from 87 countries won medals, and 59 of them won at least one gold medal. Both of these categories set new records.

Two gold medals were awarded for a first-place tie in the women's 100 metre freestyle swimming event. No silver medal was awarded as a consequence.

Three silver medals were awarded for a second-place tie in the men's 100 metre butterfly swimming event. No bronze medal was awarded as a consequence.

All content from Kiddle encyclopedia articles (including the article images and facts) can be freely used under Attribution-ShareAlike license, unless stated otherwise. Cite this article:
2016 Summer Olympics medal table Facts for Kids. Kiddle Encyclopedia.