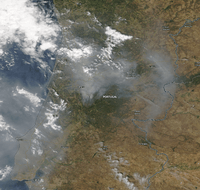 A series of deadly wildfires erupted across central Portugal during the night of 17–18 June 2017, resulting in at least 65 deaths and at least 254 injured people.

The majority of deaths took place in Pedrógão Grande when a fire swept across a road filled with evacuees. Portuguese officials dispatched more than 1,700 firefighters nationwide to combat the blazes and Prime Minister António Costa declared three days of national mourning.

All content from Kiddle encyclopedia articles (including the article images and facts) can be freely used under Attribution-ShareAlike license, unless stated otherwise. Cite this article:
2017 Portugal wildfires Facts for Kids. Kiddle Encyclopedia.