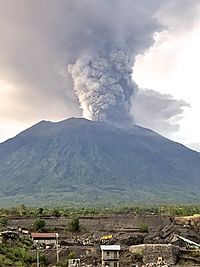 Mount Agung, a volcano on the island of Bali in Indonesia, erupted in 2017. Thousands of people had to leave the area. Air travel was affected. As of 27 November 2017, the alert level was at its highest and evacuation orders were in place.

Tectonic earthquakes from the volcano had been detected since early August. Volcanic activity increased for several weeks. It decreased significantly in late October. A second, more violent period of major activity began in late November.

Forty thousand people had to leave 22 villages around Mount Agung. Airports had to be closed. More than 400 flights were canceled. About 59,000 passengers could not get on their flights.

All content from Kiddle encyclopedia articles (including the article images and facts) can be freely used under Attribution-ShareAlike license, unless stated otherwise. Cite this article:
2017 eruption of Mount Agung Facts for Kids. Kiddle Encyclopedia.