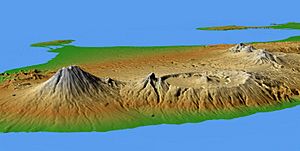 Mount Agung is at the left; Mount Batur, or what remains of it, is to the right of center

Mount Agung or Gunung Agung is a volcano in Bali in Indonesia, located south east of Mt Batur volcano, also in Bali. Towering 3,031 metres above sea level, Mount Agung is the highest mountain on the island of Bali and the fifth highest volcano in the whole of Indonesia. It dominates the surrounding area, influencing the climate, especially rainfall patterns.

Mount Agung has huge spiritual significance to the people of the island, and is home to the 'Mother Temple' of Besakih. It forms part of a chain of volcanos that make up the back bone of Bali. Balinese legend has it that Agung was created when the Hindu God Pasupati split Mount Meru (the spiritual axis of the universe) and formed Mount Agung with a fragment. The most important temple on Bali, Pura Besakih, is located high on the slopes of Gunung Agung.

The eruption in 1963 was one of the largest and most devastating in Indonesia's history. Gunung Agung is an active volcano, with a large and deep crater that occasionally emits smoke and ash. From a distance, the mountain appears to be perfectly conical. 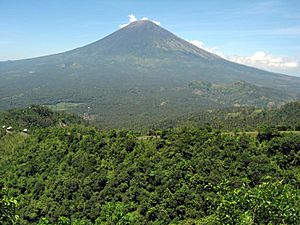 Mount Agung viewed from the east

From the peak of the mountain, it is possible to see the peak of Mt Rinjani on the nearby island of Lombok, to the east, although both mountains are frequently covered in clouds.

Mount Agung eruption in 1963 was one of the largest 20th century eruptions anywhere in the world, and most devastating in Indonesia's history. Historical eruptions of the volcano are poorly recorded, but there was certainly one in the 1820s.

Agung erupted in 1843, as recorded in a report by Heinrich Zollinger:

"After having been dormant for a long time, this year the mountain began to be alive again. In the first days of the activity earthquake shocks were felt after which followed the emission of ash, sand and stones."

Mount Agung last erupted in 1963, causing devastation in the eastern part of Bali and beyond. Ancient Balinese texts demand that the most important of Balinese Hindu rituals, the Eka Dasa Rudra, is performed every 100 years to purify our world. Such a ceremony was scheduled at Besakih temple in 1963. In February of that year Mount Agung started to rumble, and high priests argued that this was a bad omen from the Gods and that the wrong date had been scheduled for the ceremony. By this time though President Sukarno had arranged to attend with a group of foreign dignatories and he ordered that the event must go ahead.

On March 8th the mountain was in a full pre-eruption phase and on March 18th it blew with such force that the top 100 metres or more was blasted away. Lava spewed over much of eastern Bali, a devastating gas cloud swept across villages and ash destroyed all crops. Up to 2,000 people are thought to have died and tens of thousands of homes were destroyed. Quite remarkably, the mother temple of Besakih perched high on the slopes of the mountain was relatively untouched by this event, fuelling the local spritual reasoning for the eruption. Further, many Balinese argued that this eruption was a portent of dreadful things to come and felt vindicated when the whole nation was plunged into civil crisis in 1965.

The cleansing rituals from the 1963 ceremonies were finally finished at Besakih in 1979. 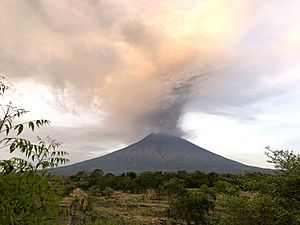 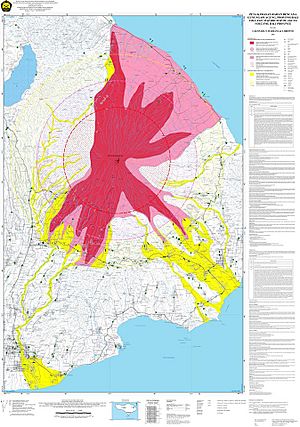 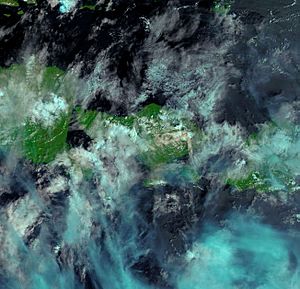 The volcano erupted once again on January 11, sending plumes of smoke and ash, while Indonesia's Bali international airport was declared safe, operating normally. The eruption column was reported to rise 2.5 km above the mountain.

Mount Agung has erupted again on February 13, just days after it was declared safe.

The 2017 eruption caused some 40,000 people to be evacuated from 22 villages around Mount Agung. It also caused surrounding airports to be closed. Lombok International Airport, on the neighboring island of Lombok, closed on 26 November, but was reopened the next morning, only to be closed again on 30 November. Lombok's airport reopened on 1 December. Ngurah Rai International Airport, located at the southern tip of the island and southwest of the volcano, closed on 27 November. More than 400 flights were canceled and about 59,000 passengers remained grounded. The airport was reopened on 29 November. This eruption also caused a decline in tourism on Bali by about 30%.

At lower elevations the mountain is covered in lush forest, but this soon gives way to a desolate landscape of barren volcanic rock and ash scree. From the peak of Mount Agung the views are extraordinary in all directions, but perhaps most dramatic to the east where the sun rises above Mount Rinjani on Lombok.

Wild pigs and macaques abound on the forested slopes of Mount Agung. Birdlife is impressive including frequent sightings of hawks and eagles, but is not as obvious and easy to observe as in the West Bali National Park. A pair of monkeys are frequently seen at the crater rim above Pura Pasar.

Mount Agung dominates the surrounding area influencing the climate. The clouds come from the west and Agung takes their water so that the west is lush and green and the east dry and barren.

The best time to climb Mount Agung is in the dry season of April to October. January and February should certainly be avoided if possible due to heavy rain, possible flooding and even landslides in the area.

At lower elevations it remains tropical but becomes distinctly cold and often very windy on the high bare rock slopes. 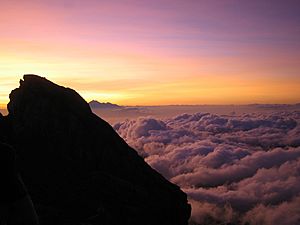 View from the top

There are two main routes up the mountain; one from Pura Besakih proceeds to the higher western peak and starts at approximately 1,100 m (3,610 ft). The second route, reputed to take five hours (one-way), proceeds to the southern peak and commences higher from Pura Pasar Agung, near Selat.

No matter your experience, do not attempt to climb Mount Agung without a guide. The routes are difficult to follow and you are likely to get lost. Avoid climbing in the wet season and especially in January and February. You are still in the tropics but Mount Agung is a high peak and the top is often cold and windy so bring appropriate clothing.

Some mild altitude sickness is possible. Understand this condition and be aware of the symptoms. It is important to drink more water than you think you need and to avoid the dehydrating effects of substances such as alcohol and caffeine for 24 hours before your planned ascent. At these elevations though, symptoms should only be minor. 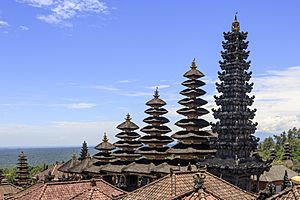 Pura Pasar Agung is one of Bali's nine directional temples and it sits at the start point of one of the ascent routes up Mount Agung. It is close to the village of Selat on the main road from Rendang to Karangasem.

The Sidemen/Selat area is stunningly beautiful. It incorporates several valleys in the foothills of Mount Agung on the route between Karangasem and Rendang. The drive through this area is most scenic and one of the very best in Bali. Stunning rice terraces, lush forested hill-sides and the mountain itself, all combine to make this a magical area to visit. If you stop in the village of Selat it is easy to find local guides for undemanding hikes in the area.

Besakih is known as the Mother Temple of Bali. Besides being the most important temple for the whole of the island, another attraction of Besakih, actually a complex of temples, is its dramatic location on the southern slopes of Mount Agung.

All content from Kiddle encyclopedia articles (including the article images and facts) can be freely used under Attribution-ShareAlike license, unless stated otherwise. Cite this article:
Mount Agung Facts for Kids. Kiddle Encyclopedia.